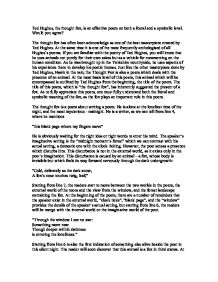 Ted Hughes, the thought fox, is an effective poem on both a literal and a symbolic level. Would you agree?

Ted Hughes, the thought fox, is an effective poem on both a literal and a symbolic level. Would you agree? The thought fox has often been acknowledge as one of the best masterpiece created by Ted Hughes. At the same time it is one of the most frequently anthologised of all Hughes's poems. If you are familiar with the poetry of Ted Hughes, you will know that he uses animals not purely for their own sakes but as a vehicle for commenting on the human condition. As he was brought up in the Yorkshire countryside, he uses aspects of his experience there to develop his poetic themes. Just like the other masterpiece done by Ted Hughes, Hawk in the rain, the Thought Fox is also a poem which deals with the presence of an animal. At the most basis level of this poem, this animal which will be encompassed is outlined by Ted Hughes from the beginning, the title of the poem. The title of this poem, which is "the thought fox", has inherently suggested the present of a fox. As to fully appreciate this poem, one must fully understand both the literal and symbolic meaning of the fox, as the fox plays an important role in this poem. ...read more.

"Two eyes serve a movement, that now And again now, and now, and now Sets neat prints into the snow Between trees, and warily a lame Of a body that is bold to come" The first two lines of this phrase are deliberately broken by punctuation. This broken verse mimes the nervous, unpredictable movement of the fox as it steps forward, then stops to check on the terrain before it runs on. The tracks which the fox leaves onto the snow are themselves duplicated by the verse "sets neat prints on snow." The first three words are internal rhyme, neat, identical and as sharp as the fox paw's mark, pressing gently on to the soft open vowel of "snow." Although the fox still remains indistinct, but the phrase "lame shadow" evokes a more precise image of the fox as the fox freezes with one its front paw lift up, as it stop alertly to explore the terrain. Once the fox starts running on again, its "Shadow lags by stump and in hollow", revealing the great speed of the fox as it dashes through the forest. ...read more.

Now that the fox is no longer a mysterious image for the poet and it has emerge into the poet's head. The "dark hole" in line 22 represents the poet's head, the thought's home. The thought fox has returned to its thought home, and now it is caught forever on the page. The speaker returns to his physical settings where the "window is starless still; the clock ticks" and a page that is no longer blanked, but now printed with words The thought fox is a successful poem in both literal and symbolic level. On the surface level, the literal level, the image of fox is so thoroughly describes that it will certainly evokes a mental picture of fox in the readers minds. Moving in to the depth, the symbolic level, the poem has proved to be more attractive with the perfectly created movements of the fox which symbolize the different state of thought process. The poem has demonstrates a strong establishment in both literal and symbolic value. From these both level, we can conclude that the process of writing is almost unconscious. Words form themselves and take place gradually until they become absolutely clear. The act of creativity will then becomes a satisfying conclusion. ...read more.