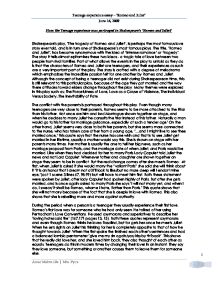 Teenage experiance in romeo and juliet

How the Teenage experience was portrayed in Shakespeare's 'Romeo and Juliet' Shakespeare's play, "The tragedy of Romeo and Juliet", is perhaps the most famous love story ever told, and is in turn one of Shakespeare's most famous plays. The title, "Romeo and Juliet", has become synonymous with the idea of 'intense romance' or 'tragedy'. The story it tells almost epitomizes these two ideas - a tragic tale of love between two people from rival families. Part of what allows the events in the play to unfold as they do is that the characters of Romeo and Juliet are teenagers, and their experiences as such are a very important part of the play. The story is crafted with a degree of melodrama which emphasizes the incredible passion felt for one another by Romeo and Juliet. Although the concept of being a teenager did not exist during Shakespearean time, this is still relevant to this particular play, because of the age they got married and the way there attitudes toward elders change throughout the play. Many themes were explored in this play such as; The Forcefulness of Love, Love as a Cause of Violence, The Individual Versus Society, The Inevitability of Fate. The conflict with the parents is portrayed throughout this play. Even though many teenagers are very close to their parents, Romeo seems to be more attached to the Friar than his father. ...read more.

He talked of her using Pertrachan's Love Conventions. He used oxymorons and superlatives to describe her 'loving hate/cold fire' (167,171 pages 13, 15). Both these quotes represent oxymorons and even though Romeo thinks he loves Rosalind, but for gets her once he meets Juliet. When he sets sights on Juliet his thinking for her is completely opposite to that of how he thought towards Juliet. When the first spoke the finished each other's sentences and had a balanced iambic pentameter 'give me my sin again/you kiss by th'book'. This shows that he really did love her, and she loved him back, they also thought of each other as equals. Teenagers do this in modern times by changing their lover in an instant. They say they love someone, but something or another causes them to leave them for someone else. Teenagers often go through many mood swings. This is very evident in 'Romeo and Juliet'. Before the Capulet Ball Romeo is depressed, but his mood quickly changes to happy and in love, when he meets Juliet 'give me my sin again'. This quote shows that Romeo is really in love with Juliet and wants to keep kissing her. He goes through another mood swing later in the play. After he is married, he goes to tell Mercutio and others the good news, but when he finds them they are in a fray with Tybalt and other Capulet. ...read more.

From the beginning the teenage experience is showed with great detail and emphasis. One of many themes which were explored intensively was divvied between love and hate and fate. Such was showed when Romeo and Juliet marry each other behind the parents back. Even though they were both kin of rival families they did not let that come between them 'whats a name/my name, dear saint, is hateful to myself/because it is an enemy to thee ;'( Act 2 scene 2 lines 43, 55-56). The quotes represented above shows the audience that they are both wanting to defy there name, and that love was more important to them than their family. Still today teenagers go behind their parent's backs and turn around getting hurt themselves. Even though teenagers don't get married when there of young age they still do things that Romeo and Juliet do in the play. Shakespeare may have unknowingly summarized how teenagers act in this play. In conclusion, there are many similarities between teenagers in the twenty first century and teenagers in the sixteenth and seventeenth centuries. There is also a vast amount of differences between the two and it they are both rendered in the play. The most similar theme between teenager now and teenagers in Shakespearean times is that they are not as close to their parents and have an increased responsibility. ?? ?? ?? ?? Teenage experience essay - 'Romeo and Juliet' June 16, 2009 Amar Amar Mehta 10v | Mrs. Pycz ...read more.

There is a good opening paragraph with some useful exploration of the relationships between Romeo and Juliet and their parents, but it is not well structured and, in parts, drifts away from the requirements of the essay prompt into narrative summary of the plot.

Paragraph management is quite good, with each paragraph following a theme of the analysis, but there are frequent errors in sentence construction and grammar.