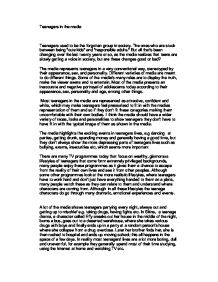 Teenagers Represented In The Media

Teenagers in the media Teenagers used to be the forgotten group in society. The ones who are stuck between being "cute kids" and "responsible adults." But all that's been changing over the last twenty years or so, as the media realizes that teens are slowly getting a voice in society, but are these changes good or bad? The media represents teenagers in a very conventional way, stereotyped by their appearance, sex, and personality. Different varieties of media are meant to do different things. Some of the media's many roles are to display the truth, make the viewer aware and to entertain. Most of the media presents an inaccurate and negative portrayal of adolescents today according to their appearance, sex, personality and age, among other things. ...read more.

Although some other programmes look at the more realistic lifestyles, where teenagers have to work hard and don't just have everything handed to them on a plate, many people watch these as they can relate to them and understand where characters are coming from. Although in all these lifestyles the teenage characters do go through many dramatic, emotional experiences and events. A lot of the media shows teenagers partying every night, always out and getting up to mischief e.g. taking drugs, having fights etc. In Skins, a teenage drama, a character called Effy sneaks out her house in the middle of the night, burns a bus, goes out to a deserted warehouse, where she takes various drugs with boys and finally ends up in a party at a random person's house where she collapse from a drug overdose. ...read more.

Although teenagers are represented positively in many parts of the media, programmes such as the OC show characters like Marissa and Ryan acting kindly and maturely e.g. when Marissa sees a man being mugged, she comes to help him and calls the police this shows she is caring and responsible, which is a positive image of teenagers in the media. In conclusion Teenagers in the media are shown in lots of different ways, often as being a problem to society e.g. controlling, rude and disrespectful, this is shown in soaps, dramas, movies and news, it gives out a very negative image on teenagers, which isn't always fair. Teenagers can be represented positively, helping the community and being polite and social although this is not usually the case. Mainly teenagers are shown in a negative way and their characters and dilemmas are not realistic. ...read more.