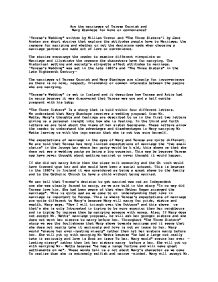 Are the marriages of Teresa Cornish and Mary Stanhope for Love or convenience? 'Teresa's Wedding" written by William Trevor and "The Three Sisters'1 by Jane Austen are short stories that explore the attitudes people hove to Marriage, the reasons for marrying and whether or not the decisions made when choosing a marriage partner are made out of love or convenience. The stories encourage the reader to examine different viewpoints on Marriage and illustrate the reasons the characters have for marrying. The Historical setting and society's etiquette affect attitudes to marriage. 'Teresa's Wedding" was set in the late 1960's and 'The Three Sisters" in the late Eighteenth Century- The marriages of Teresa Cornish and Mary Stanhope are clearly for inconvenience as there is no love, respect, friendship or common interests between the people who are marrying, "Teresa's Wedding" is set in Ireland and it describes how Teresa and Artie had to marry because it was discovered that Teresa was one and a half months pregnant with his baby, "The Three 5isters" Is a story that is told within four different letters. We understand that Mary Stanhope receives a wedding proposal from Mr. ...read more.

She claims That she hates Mr Watts but will marry him so that her sisters will not marry before her and +o triumph over the Duttons. 5he is not physically attracted to Mr. Watts, disregarded in both of these situations. One difference between the two stories is that we feel that Teresa is being forced to marry by Father Hogan and her family and she is not given any choice in the matter. However, although there is pressure for Mary to marry Mr Watts/ she is stilI left with the choice as to whether she will marry him or not If she does not marry Mr. Watts, then he will marry one of her sisters. However, I personally think that even though there is no love to begin with between Teresa and Artie, that love can grow and a child might bring them closer together as They shore the parenting role. This relationship might develop into love and initially there must have been some physical attraction between them for her to have, become pregnant and they did decide to have a sexual relationship. As for Mary and Mr WaTts/1 think it will be a foiled marriage and will not work out because she wholeheartedly detests him and is marrying him for material reasons which will not bring happiness. ...read more.