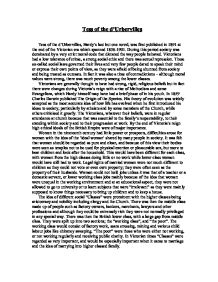 Tess of the d'Urbervilles Tess of the d'Urbervilles, Hardy's last but one novel, was first published in 1891 at the end of the Victorian era which spanned 1836-1901. During this period society was dominated by a very strict moral code that dictated the way people behaved. Victorians had a low tolerance of crime, a strong social ethic and there was sexual repression. These so-called social laws governed their lives and very few people dared to speak their mind or express their own points of view, as they were afraid of being shunned from society and being treated as outcasts. In fact it was also a time of contradictions - although moral values were strong, there was much poverty among the lower classes. Victorians are generally thought to have had strong, rigid, religious beliefs but in fact there were changes during Victoria's reign with a rise of Methodism and some Evangelism, which Hardy himself may have had a brief phase of in his youth. In 1859 Charles Darwin published The Origin of the Species. His theory of evolution was widely accepted as the most accurate idea of how life has evolved when he first introduced his ideas to society, particularly by atheists and by some members of the Church, while others criticised it greatly. The Victorians, whatever their beliefs, were in regular attendance at church because that was essential to the family's respectability, to their standing within society and to their progression at work. By the end of Victoria's reign high ethical ideals of the British Empire were of major importance. Women in the nineteenth century had little power or prospects, difficulties arose for women with the idea of the 'ideal woman' shared by many people in society. It was felt that women should be regarded as pure and clean, and because of this view their bodies were seen as temples not to be used for physical exertion or pleasurable sex, but more to bear children and look after the household. ...read more.

This is defiant of Tess because society would say that she should not feel this way about her 'bastard', and Hardy uses this as a way to show his point of view, that although the baby was conceived in a different fashion it was not the child's fault and that it should not be deprived of its mother's love. Hardy also shows Tess' love for the child in the language he uses 'Her darling about to die, and no salvation.' Angel and Tess' relationship is presented by Hardy in the two viewpoints of each of the lovers. Both Angel and Tess are very young and neither see each other as they really are. Angel sees Tess as the 'ideal' woman 'What a fresh and virginal daughter of Nature that milkmaid is!' Angel shows how he, like the rest of society, is stuck in the way of thought that women had to be 'pure' and 'innocent.' He uses the word 'virginal' and refers to 'nature' to emphasise his beliefs. It is quite ironic that he thinks this way because Angel is 'his own man' as he goes against his family's expectations that he should follow in the family "trade" and become a minister. He also has had a relationship with an older woman, suggesting that in this relationship they had sex, meaning that he is not actually 'virginal' himself. This shows that, in some ways, Angel is a man of his time - with very different rules for men and women. Tess on the other hand perceives Angel differently and sees him as intelligent and his own man, 'At first Tess seemed to regard Angel Clare as an intelligence rather than as a man.' She also shows this when listening to him playing the harp "But you, sir, can raise up dreams with your music, and drive all such horrid fancies away!" Hardy uses language to show how Tess also sees Angel 'It was true that he was a present out of his class. ...read more.

Then Angel returns with renewed loyalty and love for Tess. Tess recovers this same love and loyalty for Angel, and once Angel has left she then realises she hates Alec because, again, he has been her undoing and so she kills him. This is related through the landlady helping the reader to keep sympathy with Tess, as the reader does not actually see her commit the murder, it is unveiled gradually through Alec's spreading blood on the ceiling; "The oblong white ceiling, with this scarlet blot in the midst, had the appearance of a gigantic ace of hearts." This is again referring to red, but in this case is "scarlet" and the shape suggests that it's Alec's heart that has been stabbed, or that, in fact, Tess's own heart is broken. When describing the incident to Angel later on she says "My heart could not bear it." Tess spends a few days with Angel and they find an old uninhabited mansion in the country, this is their haven for five days. On their arrival Angel "parted the shutters to the width of two or three inches. A shaft of dazzling sunlight glanced in to the room." The sunlight represents hope and happiness, a small window of hope and a little bit of happiness now that Tess is once again with Angel. On discovery they escape and stop at Stonehenge a "heathen temple" to rest. Tess is so tired that she lies down on an oblong slab, like a sacrifice to the ancient Gods or a sacrifice to the false morals of society. There are also links here with Christ's death - like Christ she is seen as being sacrificed and Tess tells Angel to look after her sister Liza Lu in the same way that Christ asked his mother to look after one of the disciples. Christ knew it was his fate to die, Tess really also knows, when she wakes she asks; "'Have they come for me? ....... I am ready,' she said quietly. ...read more.