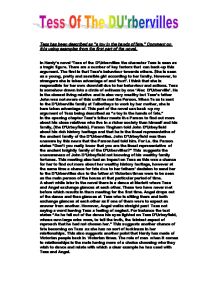 Tess has been described as "a toy in the hands of fate." Comment on this using examples from the first part of the novel. In Hardy's novel 'Tess of the D'Urbervilles the character Tess is seen as a tragic figure. There are a number of key factors that can back-up this argument. The first is that Tess's behaviour towards others. She is seen as a young, pretty and sensible girl according to her family. However, to strangers she is taken advantage of and 'hurt'. I think that she is responsible for her own downfall due to her behaviour and actions. Tess is somehow drawn into a circle of evilness by one 'Alec D'Urberville'. He is the closest living relative and is also very wealthy but Tess's father John was not aware of this until he met the Parson. When Tess is sent to the D'Urberville family at Talbothays to work by her mother, she is here taken advantage of. This part of the novel can back-up my argument of Tess being described as "a toy in the hands of fate." In the opening chapter Tess's father meets the Parson to find out more about his close relatives who live in a richer society than himself and his family, (the D'Urbeyfields). Parson Tingham told John D'Urbeyfield about his rich history heritage and that he is the lineal representative of the ancient family of the D'Urbervilles. ...read more.

Another traveller crashes into Tess's carriage resulting in the death of Prince. Tess feels she is to blame for this as she was responsible for the lamp being lit and the carriage being visible to others. For i.e. Tess states "Tis all my doing-all mine!" the girl (Tess) cried. This suggests Tess's action is to blame for the horse's death to come about. This also comes to a point in which Hardy is trying to stress out, the peoples behaviour in Victorian times. Has behaviour have anything to do with class? I personally think it has. Social classes back in Victorian times were to be seen as 'clumsy' and 'out of control' compared to the behaviour of upper classes who were to be seen as more sensible and well behaved. Tess's behaviour compared to her parents are to be seen as rather similar by the actions made by both seen to be not very well mannered or sensible or even clever. Tess's mother sends her to the D'Urberville family at Talbothays. This comes around because of Tess's behaviour towards the death of Prince. So she is sent to work at their wealthy relatives the D'Urbervilles who are to be seen as upper classes. For i.e. Tess states "Well, as I killed the horse mother, she said mournfully, "I suppose I ought to do something" suggests the result in Tess having no choice but to accept the fact that she has no choice but to go. ...read more.

This comes out mainly near the end of chapters 10, 11 and 12. Her beauty is taken advantage of but Tess should have been stronger than she was and firmly stand her ground. But due to the fact that men were given higher privilege than women in Victorian times this may of caused an affect in her actions for standing up for herself. Tess is also very easily persuaded into a number of 'traps' or rings of evilness. This is where her guardian angel comes in. Her colour is white representing peace, beauty, feminine and innocence. The rape scene is a perfect example in a question to ask where was Tess's guardian angel? Where was her protection against such coarse acts and patterns to be drawn onto her? Her own downfall could also be due to the fact of Hardy's views on people back in Victorian times. Men were obviously given higher privilege than women, and in some cases had the power and control of meetings and women's behaviour. The reason men were given higher privilege than women was due to the fact that they were usually the main power of families and even society back in Victorian days. They were given the privilege to order out rules and other types of social acts. How others may have thought Tess was responsible for her own downfall is quite simple. Her actions and behaviour can count as a big encounter as we have seen as the story had progressed. ?? ?? ?? ?? ...read more.