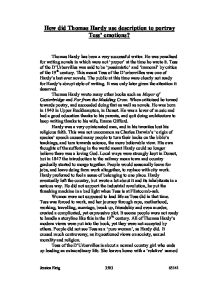 Tess of the Durbervilles

How did Thomas Hardy use description to portray Tess' emotions? Thomas Hardy has been a very successful writer. He was penalised for writing novels in which were not 'proper' at the time he wrote it. Tess of the D'Urbervilles was said to be 'pessimistic' and 'immoral' by critics of the 19th century. This meant Tess of the D'urbervilles was one of Hardy's last ever novels. The public at this time were clearly not ready for Hardy's abrupt style of writing. It was only later given the attention it deserved. Thomas Hardy wrote many other books such as Mayor of Casterbridge and Far from the Madding Crow. When criticised he turned towards poetry, and succeeded doing that as well as novels. He was born in 1940 in Upper Bockhampton, in Dorset. He was a lover of music and had a good education thanks to his parents, and quit doing architecture to keep writing thanks to his wife, Emma Gifford. Hardy was a very opinionated man, and in his twenties lost his religious faith. This was not uncommon as Charles Darwin's 'origin of species' speech caused many people to turn their backs on the bible's teachings, and turn towards science, the more believable view. His own thoughts of the suffering in the world meant Hardy could no longer believe there was a loving God. Local ways were strongly kept in Dorset, but in 1847 the introduction to the railway mean town and country gradually started to merge together. People would seasonally leave for jobs, and leave doing farm work altogether, to replace with city work. Hardy preferred to feel a sense of belonging to one place. Hardy eventually left the country, but wrote a lot about it and its inhabitants in a serious way. He did not support the industrial revolution, he put the threshing machine in a bad light when Tess is at Flintcomb-ash. ...read more.

This is one of the happiest moments in the book. A lot of chapter 17 is based around Angel Clare and Tess talking, and flirting, which seems to be a bit of a relief from the heavy plot for the reader so far. Phase the fifth-the woman pays, is a very dramatic section. Tess' life goes from its happiest, to its worst. Hardy again uses personification, by using the objects around Tess to represent how isolated and uncared for Tess feels. He either says how they are engrossed in their own problems, or simply don't care. 'All material objects around announced their irresponsibility with terrible iteration'. If Tess feels not even objects care, how will she feel about people? This is the chapter where Angel Clare tells her she is not the woman he thought she was, and that he cannot forgive her. He merely says to Tess that she is 'another woman in your shape'. When Tess realises Angel will never view her as he once did, Hardy describes the change in Tess' beautiful face. Her face turns white, her cheeks flaccid, her mouth dry, and like a small round hole, her eyes making Angel's flesh creep. Not only does the weather react with how beautiful Tess is, but her looks too. It appears Tess is in disbelief, as she staggers, implying she cannot handle the terrible news she is hearing. She then bursts into 'self-sympathetic tears'. In the 19th century Angel's decision and thoughts would be understandable. Women were supposed to be innocent and pure when they got married, men did not have the same restrictions as women, and this seems unfair nowadays. But Hardy is trying to make the point that she is still pure, she did not choose what happened to her, she labels herself as a victim. On her way there to Flintcomb-Ash, Tess feels lonely without Clare, and depressed, back to how she felt when she got raped and her baby died. ...read more.

I think this is probably the happiest moment of Tess' life, not at the dairy. She was a na�ve girl then, but after all she has been through, she is even more appreciative of having Angel there. When she is caught for the murder she seems ready to die, because all that time she had been working, depressed and lonely, and killing Alec was worth it, for those few days with Angel. In conclusion Hardy used description in an original and imaginative way. He uses many different methods to help the audience understand the emotions Tess feels. He wrote the book to get people to feel attracted to Tess as a character, and then used her to help people see his opinion of society, women, sexual morality and religion. He used a lot of the surroundings around Tess to portray how she felt and what she was going through. The artificiality of Sandbourne demonstrates the artificiality of Alec and Tess' relationship, whilst when she is happy there is good weather, and when she is depressed the weather turns bad. He uses personification to illustrate what she thinks everyone thinks of her, and what they really do think of her, and uses it to show Tess' slight paranoia that even objects have bad opinions of her. He says a lot about how she feels towards the different characters, and her thoughts are often reflected in her actions, he tells us of how her strong-willed personality helps keep her emotions under control, and how her beauty is reflected in how she feels, and affects how other people feel about her. I think this is a moving novel with a well thought out plot, yet with a very original use of description, and has created a lot of new opinions to be formed about the world, whether or not it was accepted when it was first written in the 19th century. Thomas Hardy's Tess of the D'urbervilles will remain an incredibly expressive, remembered classic for a long time. ?? ?? ?? ?? Jessica Fleig 3583 65141 ...read more.