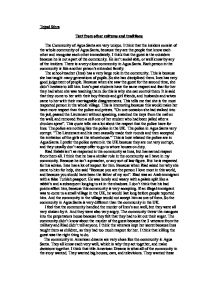 Text from other cultures and traditions

Tejpal Sihra Text from other cultures and traditions The Community of Agua Santa are very unique. I think that the insiders consist of the whole community of Agua Santa, because they are the people that know each other and recognise each other immediately. I think that the guest is the outsiders because he is not a part of the community. He isn't social able, or well know by any of the insiders. There is a very close community in Agua Santa. Each person in the community is like another person's extended family. The school teacher (Ines) has a very large role in the community. This is because she has taught many generations of pupils. So she has disciplined them. Ines has very good judgement of people. Because when she saw the guest for the second time, she didn't hesitate to kill him. Ines's past students have the same respect and fear for her they had when she was teaching them. So this is why she can control them. It is said that they come to her with their boy friends and girl friends, and husbands and wives came to her with their marriageable disagreements. ...read more.

Until they find out that he has made models of them all. This outrages the council, and they decided to demolish the model because it revels a lot of the town's secrets. This makes them feel very venerable. The village then decides to keep the model as a tourist attraction. This excites the town, because they feel that they can get closer to the American dream. But it all goes wrong, the tourist treat the people of the village like the models of the people in the model village. From this story, we can learn that a community only respects you if you are an insider. But to be an insider you have to act the way that the community wants you to act. Both of these stories are based on revenge. There main elements are the same, but they are very different. I prefer the Story by Isabel Allende, The school teachers guest because I feel the story has a better structure. I think that the contents of The school teachers guest is a lot more appealing to me, because it has a lot of tradition, that makes the story interesting. ...read more.