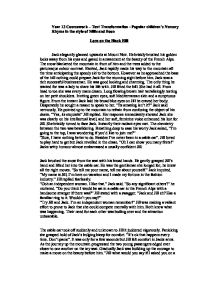 Text Transformation - Popular children's Nursery Rhyme in the style of Mills and Boon - Love on the Black Hill.

Year 13 Coursework - Text Transformation - Popular children's Nursery Rhyme in the style of Mills and Boon Love on the Black Hill Jack elegantly glanced upwards at Mount Noir. He briskly brushed his golden locks away from his eyes and gazed in amazement at the beauty of the French Alps. The snow blanketed the mountain in front of him and the trees added to the picturesque colour contrast. Excited, Jack rapidly made his way to the mountain all the time anticipating the speedy ski to the bottom. However as he approached the base of the hill nothing could prepare Jack for the stunning sight before him. Jack was a rich successful businessman. He was good looking and charming. The only thing he wanted for was a lady to share his life with. Jill fitted the bill. She had it all. From head to toe she was every mans dream. Long flowing brown hair tantalisingly resting on her petit shoulders. Inviting green eyes, soft Mediterranean skin and a sumptuous figure. From the instant Jack laid his broad blue eyes on Jill he craved her body. Desperately he sought a reason to speak to her. "Its amazing isn't it?" Jack said nervously. He pointed up to the mountain to refrain from confusing the object of his desire. ...read more.

Eventually their lips met and the passion took over. It was no longer cold outside the heat was immense. His hands were running all over her body. Jill had found her knight in shining armour. Everything was how it should be. It was everything she had dreamed of as a little girl. She was a true believer in romance and was willing to wait until true love found her. Was this it? She was sure it was. The view, the location, the setting, the man. Everything was just perfect. "Oh Jack I cant believe how fast things are moving. Should we be doing this so soon?" Jill wondered. "Does it feel right? It does to me." Jack assured her. "It feels right but I'm just scared that I'm falling for a guy I've known barley thirty minutes who seems jus perfect." " I'm falling for you to Jill. It's like fate. I mean it seems you were meant for me." Jack and Jill seemed astounded by what was happening but neither rejected each others advances and neither wanted to stop. Jill softly rested her head on Jacks broad shoulders and gazed into the sky. Both smiled their flawless smile as they paused to consider the events that had just taken place. "So now that I have I have got to know you a little better how's about we have dinner one time." ...read more.

You fell one hundred feet down a mountain and survived. I think it's your lucky day!" Jill said. "If your head felt anything like mine you wouldn't be feeling too lucky right now Jill" Jack groaned back at her. "Wow at least you remembered my name" "How could I forget it? Anyway without meaning to sound rude what are you doing here?" Jack was curious as to Jill's motives. He remembered how he felt for her but had forgotten about her lust for him. Jack longed to hear Jill confess that her feelings were mutual to his. Jill looked up straight into the eyes of Jack. Once again their perfect faces met and the connection returned. "I thought it was the least I could do for you after everything Jack. Besides, do you think I was going to let you get away without buying me the dinner you promised me? You may have disturbed memory but I certainly don't" The humour between the two was still very much evident and although Jack had lost his memory and temporarily a few of his senses the fire between the two had not been put out by the accident. Both smiled as Jill leaned forward and pecked Jack on the cheek. They once again fell into each others arms and Jill eased Jack's pain as they fell asleep right there on the hospital bed holding one another lovingly. ...read more.