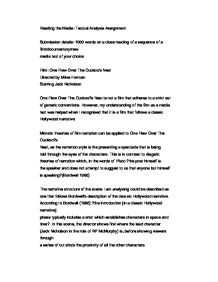 Textual analysis of One Flew Over The Cuckoo's Nest.

Reading the Media: Textual Analysis Assignment Submission details: 1000 words on a close reading of a sequence of a film/documentary/new media text of your choice Film: One Flew Over The Cuckoo's Nest Directed by Miles Forman Starring Jack Nicholson One Flew Over The Cuckoo?s Nest is not a film that adheres to a strict set of generic conventions. However, my understanding of the film as a media text was helped when I recognised that it is a film that follows a classic Hollywood narrative. Mimetic theories of film narration can be applied to One Flew Over The Cuckoo?s Nest, as the narration style is the presenting a spectacle that is being told through the eyes of the characters. This is in contrast to diagetic theories of narration which, in the words of Plato ?the poet himself is the speaker and does not attempt to suggest to us that anyone but himself is speaking?(Bordwell 1985) The narrative structure of the scene I am analysing could be described as one that follows Bordwell's description of the classic Hollywood narrative. According to Bordwell (1985) ?the introduction [in a classic Hollywood narrative] phase typically includes a shot which establishes characters in space and time?. ...read more.

The area McMurphy is sitting in contrasts with the area that the rest of the patients occupy. They are sitting in a well-lit area where they, so low on confidence and self-esteem, can feel secure. McMurphy, a rebel who thrives on conflict, is sitting in a much darker light. The conflict here occurs as much out of McMurphy?s boredom as it does his wanting to challenge authority. Out of the darkness, McMurphy sprays the other patients with a hose, upsetting the status quo. At this stage he has moved into a less dark area and later in the scene when he fails to pull the sink out of the floor, he stands in the exact same light as the other patients. The irony here is that the conflict McMurphy is instigating in an attempt to challenge authority is, making him become more like the patients than the wild, bubbly and sometimes dangerous person that he once was. ?Realistic motivation corroborates the compositional motivation achieved through cause and effect? (Bordwell 1985). The reality portrayed in One Flew Over The Cuckoo?s Nest achieves a ?tacit coherence among events, [and] a consistency and clarity of individual identity? ...read more.

McMurphy then says that he is going downtown, by pulling the sink out of the floor, putting it through the window and walking down the hall to freedom. He says that anyone is free to join him but only Cheswick, who had been sitting watching the two men playing monopoly, says he?d like to go too. Besides Cheswick, the reaction of the patients is nothing more than a scoff in unison, McMurphy says that he?ll take bets that he can do it. Taber bets one dollar and Martini bets a dime. Billy, who had been standing quietly in the corner, warns McMurphy that nobody could lift the sink. Undeterred McMurphy taunts Harding, who bets $25. Billy warns McMurphy for the second time but McMurphy is determined ?Get out of my way son, you?re using my oxygen, you know what I mean?? McMurphy tries once and fails. ?Giving up?? asks Harding. ?No?warming up, just warming up, warming up? replies McMurphy. At the second attempt, McMurphy?s face looks as if it is about to explode, such is his effort. His efforts are in vain however and he walks towards the door. With his back to the camera, McMurphy stops just before walking out of the door ?But at I tried, didn?t I God Dammit, at least I did that?. Ends. ...read more.