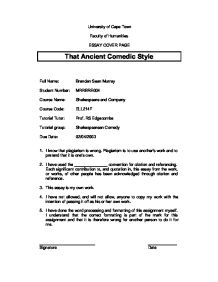 University of Cape Town Faculty of Humanities ESSAY COVER PAGE That Ancient Comedic Style Full Name: Brendan Sean Murray Student Number: MRRBRE004 Course Name: Shakespeare and Company Course Code: ELL214F Tutorial Tutor: Prof. RS Edgecombe Tutorial group: Shakespearean Comedy Due Date: 02/04/2003 1. I know that plagiarism is wrong. Plagiarism is to use another's work and to pretend that it is one's own. 2. I have used the _______________ convention for citation and referencing. Each significant contribution to, and quotation in, this essay from the work, or works, of other people has been acknowledged through citation and reference. 3. This essay is my own work. 4. I have not allowed, and will not allow, anyone to copy my work with the intention of passing it off as his or her own work. 5. I have done the word processing and formatting of this assignment myself. I understand that the correct formatting is part of the mark for this assignment and that it is therefore wrong for another person to do it for me. _________________________ _____________ Signature Date That Ancient Comedic Style A Midsummer Night's Dream is, in my belief, the realisation of Shakespeare's desire to use the form of classical Greek and Roman comedy to tell an original story. I think he was attempting to measure himself against Meander and his shadow Plautus by using their structure and conventions whilst telling his own story, as opposed to his effort a year earlier, A Comedy of Errors, where the plot is borrowed from The Menaechmi by Plautus. He succeeds in fine style, creating a play true to the roots of comedy with an impressive English flavour to it. The greatest challenge Shakespeare would have faced in bringing the ancients' mindset to the Elizabethan stage would have been the gods and their very real role in the lives of a Greek or Roman audience. But, as one would expect, he solves this problem with grace and elegance, creating Oberon and Titania - King and Queen of the Fairies. ...read more.

Love has, Shakespeare suggests, the power to heal or to truly destroy and always has repercussions in the world around the couple, be they warring or loving each other, and he proposes that the amount of couples loving in any particular place is directly proportional to how pleasant the place is. Less is not more for Shakespeare, so too with the ancient Greeks, more is more and the more the merrier. But then how does this theme tie up with the fact that Oberon forces Titania to love the ass-headed Bottom and thereby solves their conflict to both their satisfaction? To get to the heart of why the fairies are fighting we need to understand why Oberon wants the changeling boy more than a peaceful happy relationship with his queen. I believe that the answer lies in why Titania wants to keep the boy and that, in turn, is only solved by why she gives it up. Titania says in 2.i that she is keeping the boy simply for the sake of a votaress of her order that was a mortal and died giving birth to him. But when she is infatuated with Bottom, she gives up the boy to Oberon without a fight, suggesting to me that her love for the boy (or the mother) has been forgotten in her new passion for the Mechanical. After her love for Bottom is removed she falls in at Oberon's side again asking only how she ended up in the company of mortals. Obviously, her passion for Bottom eclipsed her passion for the boy that had previously eclipsed her love for Oberon and therein lies the root of their conflict. The total discord in the fairy ranks and the resultant disharmony and infertility of nature is because Titania allowed her passion to eclipse her love and Oberon couldn't bring himself to wait for it to pass. ...read more.

An abundance of love in the land of the fairies ensures a good crop and plenty of healthy children, but I think that Shakespeare was more concerned in his debate with the state of love between people and its nature. Oberon especially is responsible for stretching most Elizabethan preconceptions about love to breaking point. Taking them to their most ridiculous extreme not only heightens the comedy, but also helps Shakespeare explode these preconceptions in his audience's face raising his debate about love. The awesome regenerative power of Oberon and Titania's love is an amplification, Shakespeare suggests, of the power of our own love. A Midsummer Night's Dream is the closest Shakespeare ever got to pure classical comedy. It fulfils all the conventions of structure and style and can truly function as a fertility rite and stand as a testament to the power of love because of Oberon and Titania. The play puts forward that there are many types of illusory love out there but strongly asserts that true loves like Oberon and Titania's and Lysander and Hermia's do exist and that they are almost essential to the survival of England. Through the fairy monarchs Shakespeare intrinsically links love and the wellbeing of the natural world and therefore the natural order. A violation of Oberon or Titania's love becomes a violation of the chain of being because they become believable god figures via Shakespeare's allowing their actions to have a significant impact on the mortals' world. Being in this position of almost blas� power, much like the Greek and Roman gods of old, makes Oberon and Titania the perfect vehicle and catalyst for Shakespeare's debate about love because their every whimsical emotion is amplified in the natural world. Their world is ripe with dreamlike infinite possibility and functions clearly throughout the play to articulate not only the action, but Shakespeare's themes as well. Oberon and Titania are the ultimate anti-agalasts and so it is only fitting that they end one of the greatest classical comedies ever written dancing through the palace of Athens performing a powerful and lasting fertility rite. ...read more.