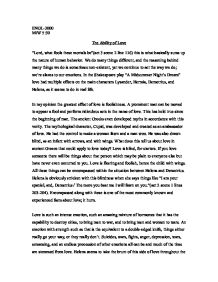 The Ability of Love.

ENGL-3000 M/W 5:30 The Ability of Love "Lord, what fools these mortals be"(act 3 scene 2 line 116) this is what basically sums up the nature of human behavior. We do many things different, and the reasoning behind many things we do is sometimes non-existent, yet we continue to act the way we do; we're slaves to our emotions. In the Shakespeare play "A Midsummer Night's Dream" love had multiple effects on the main characters Lysander, Hermia, Demetrius, and Helena, as it seems to do in real life. In my opinion the greatest effect of love is foolishness. A prominent man can be moved to appear a fool and perform ridiculous acts in the name of love. This has held true since the beginning of man. The ancient Greeks even developed myths in accordance with this verity. The mythological character, Cupid, was developed and created as an ambassador of love. ...read more.

An emotion with strength such as that is the equivalent to a double-edged knife, things either really go your way, or they really don't. Suicides, wars, fights, anger, depression, tears, screaming, and an endless procession of other emotions all can be and much of the time are stemmed from love. Helena seems to take the brunt of this side of love throughout the play, as is shown when says things like "You do me mischief. Fie, Demetrius! / Your wrongs do set a scandal on my sex."(Act 2 scene 1 lines 239-240). In ancient Greek mythology there was one reason why the great and impregnable city of Troy was destroyed, love over a woman. Such is the case in the story that is my current topic. Pain is the chief effect of love it seems in most of this play, the men fight, the women fight, the cry, the women cry. ...read more.

In conclusion, love is in fact the most powerful emotion there is. It seems to me unlikely that there is any time or place in the course of history when a man has found himself capable of fully understanding this part of himself, not even Shakespeare. This, as any other piece of literature usually is, is a very intelligent commentary on a certain aspect of the human condition, in this case love. We continue on with the concept of love because there is nobody willing to live without it. You could say it has a love hate relationship with humanity. The thought that love can be bad and hurtful is sometimes too against the norm for us, even Shakespeare knew this and I think that's why he ended the play the way he did. Using Robin Goodfellow (Puck) as his instrument, he conveniently reminds the audience that it is only a play and to make light of it, "If we shadows have offended, / Think but this and all is mended: / That you have but slumbered here / While these visions did appear"(act 5 scene 1 lines 400-403). ...read more.