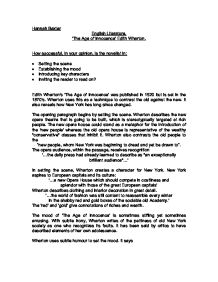 'The Age of Innocence' Edith Wharton. How successful, in your opinion, is the novelist in:&amp;middot; Setting the scene&amp;middot; Establishing the mood&amp;middot; Introducing key characters&amp;middot; Inviting the reader to read on?

Hannah Baxter English Literature. 'The Age of Innocence' Edith Wharton. How successful, in your opinion, is the novelist in: * Setting the scene * Establishing the mood * Introducing key characters * Inviting the reader to read on? Edith Wharton's 'The Age of Innocence' was published in 1920 but is set in the 1870's. Wharton uses this as a technique to contrast the old against the new. It also reveals how New York has long since changed. The opening paragraph begins by setting the scene. Wharton describes the new opera theatre that is going to be built, which is stereotypically targeted at rich people. The new opera house could stand as a metaphor for the introduction of the 'new people' whereas the old opera house is representative of the wealthy "conservative" classes that inhibit it. ...read more.

'...the world of fashion was still content to reassemble every winter in the shabby red and gold boxes of the sociable old Academy.' The 'red' and 'gold' give connotations of riches and wealth. The mood of 'The Age of Innocence' is sometimes stifling yet sometimes amusing. With subtle irony, Wharton writes of the pettiness of old New York society as one who recognizes its faults. It has been said by critics to have described elements of her own adolescence. Wharton uses subtle humour to set the mood. It says '...since an unalterable and unquestioned law of the musical world required that the German text of French operas sung by Swedish artists should be translated into Italian for the clearer understanding of English-speaking audiences.' This description in lines 55-60 shows the European influences. ...read more.

Newland Archer is concerned with what is 'the thing' to do and morally right. However, we see Newland Archer turn up deliberately late, which portrays him to be vain: '...it was "not the thing" to arrive early at the opera' The introduction of Newland Archer and the possibility of a romantic link with another woman increases the interest for the reader. To me, he seems like a superficial character from the vanity he expresses: 'He drew a breath of satisfied vanity and his eyes returned to the stage'. Even from this early introduction of his character, the reader becomes interested to read on. There is a sense that something is going to happen with a possible love interest of Newland Archer, therefore we, as the reader, are curious to find out. ...read more.