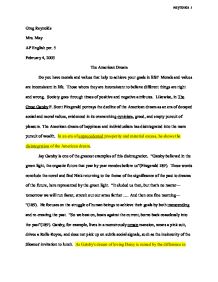 Greg Reynolds Mrs. May AP English per. 5 February 4, 2003 The American Dream Do you have morals and values that help to achieve your goals in life? Morals and values are inconsistent in life. Those whom they are inconsistent to believe different things are right and wrong. Society goes through times of positive and negative attributes. Likewise, in The Great Gatsby F. Scott Fitzgerald portrays the decline of the American dream as an era of decayed social and moral values, evidenced in its overarching cynicism, greed, and empty pursuit of pleasure. The American dream of happiness and individualism has disintegrated into the mere pursuit of wealth. In an era of unprecedented prosperity and material excess, he shows the disintegration of the American dream. Jay Gatsby is one of the greatest examples of this disintegration. "Gatsby believed in the green light, the orgastic future that year by year recedes before us"(Fitzgerald 189). These words conclude the novel and find Nick returning to the theme of the significance of the past to dreams of the future, here represented by the green light. ...read more.

"She was dressed to play golf and I remember thinking she looked like a good illustration"(185). Nick's description of Daisy's attire helps to emphasize her ability to appear "naturally rich." Mr. Gatz is a contrast to the "old rich" as "His pride in his son and in his son's possessions was continually increasing and now he had something to show me"(180). His eagerness to show off his possessions is an example of his social status. Mr. Gatz is not used to having the luxurious lifestyle, but he is now in company with Daisy and Tom who find annoyance in hearing about what he has. "I think [Gatsby] revalued everything in his house according to the measure of response it drew from her well-loved eyes"(96, 97). Gatsby's extravagant lifestyle and wild parties are simply an attempt to impress Daisy. Daisy is not impressed with material things, for she is also very wealthy and lives luxuriously. Rather than having Daisy over to his mansion, Gatsby asks Nick if "he could 'come over' some afternoon to a stranger's garden"(83). ...read more.

Nick states that there is a "quality of distortion" to life in New York, and this lifestyle often makes him seem to lose his equilibrium, especially early in the novel, as when he gets drunk at Gatsby's party. Nick realizes that the fast life of revelry on the East Coast is a cover for the terrifying moral emptiness that the valley of ashes symbolizes. Having gained the maturity that this insight demonstrates, he returns to Minnesota in search of a quieter life structured by stronger and more traditional moral values. On the surface, The Great Gatsby is a story of the thwarted love between a man and a woman. The main theme of the novel, however, encompasses a much larger, less romantic scope. It portrays the disintegration of the American dream in an era of unprecedented prosperity and material excess. As Fitzgerald sees it the American dream was originally about discovery, individualism, and the pursuit of happiness. In the 1920s depicted in the novel, however, easy money and relaxed social values have corrupted this dream, especially on the East Coast. Reynolds 1 ...read more.