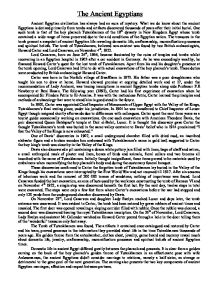 The Ancient Egyptians Ancient Egyptian civilization has always had an aura of mystery. What we do know about the ancient Egyptians is derived primarily from tombs and artifacts discovered thousands of years after their initial burial. One such tomb is that of the boy pharaoh Tutankhamen of the 18th dynasty in New Kingdom Egypt whose tomb contained a wide range of items preserved due to the arid conditions of the Egyptian nation. The treasures in the tomb present a snapshot of ancient Egyptian life revealing domestic life, craftsmanship, mummification processes and spiritual beliefs. The tomb of Tutankhamen, believed non-existent was found by two British archaeologists, Howard Carter and Lord Canarvon, on November 4th, 1922. Lord Canarvon, born on June 26th, 1866, became fascinated by the ruins of temples and tombs whilst recovering in an Egyptian hospital in 1903 after a car accident in Germany. As he was exceedingly wealthy, he financed Howard Carter's quest for the lost tomb of Tutankhamen. Apart from his and his daughter's presence at the tomb opening, Lord Canarvon had little to do with actual excavations of the boy pharaoh's tomb. These duties were conducted by British archaeologist Howard Carter. Carter was born in the Norfolk village of Swaffham in 1873. His father was a poor draughtsman who taught his son to draw at home. ...read more.

His golden throne from the antechamber, clothes chest, jewelry, game board and mummy reveal much about domestic life, jewelry, craftsmanship, mummification processes and spiritual beliefs of ancient Egyptian times. Domestic life in ancient Egypt differed greatly between the pharaoh and peasants. It is clear from a golden carving on the back of the boy pharaoh's golden throne of Tutankhamen in an affectionate pose with wife Ankesenamun, the ancient Egyptians didn't consider marriage to relations, namely a half sister, as strange or detrimental to the gene pool of the next generation. The carving also presents the two key components of ancient Egyptian marriages; affection and respect between partners. This portrayal of Tutankhamen and his wife on the golden throne as well as the clothes chest found in the tomb antechamber reveals the dress of males and females as well as cosmetics and shoes worn by Egyptians. The most common fabric used for clothes was linen. Men wore a light kilt, like robes found in the clothes chest and depicted on the throne's back panel. Tutankhamen's kilt has a large knot at the waist showing the high status of the pharaoh the knot is impractical for physical labour. Peasants wore poor quality linen cut roughly and tucked up between the legs leaving room for stretching and reaching during physical work. The linen dress worn by Ankesenamun in the throne carving reveals her status as it is pleated and bleached white as the most expensive dresses of the time were. ...read more.

It is thought Tutankhamen himself delighted in this game as five sets were discovered in his tomb. It is not known exactly how the game is played but throwsticks indicate a method of determining a player's move on the checkered board. A carving on the board's side reads 'the good god, lord of the two lands, beloved of all the gods. May he be healthy, living forever.' This shows Tutankhamen was not a heretic like predecessor Akhenaton and was popular among everyday Egyptian society. The range of materials used in the items from Tutankhamen's tomb, reveal the ancient craftsman to be very skillful and experienced realizing different substances were best for different purposes. Gold, silver, ebony, alabaster, precious stones, glass and beads were all used in the construction of various items from the tomb of Tutankhamen like his golden throne, bracelets, vulture pendant of 253 glass pieces, ebony senet board game and stone statues. It is clear then, British archaeologist Howard Carter was well facilitated for piecing together the mystery of the lost tomb of Tutankhamen due to his drawing abilities and knowledge of archaeological principles and methods. It required time, effort and perseverance from Carter to discover the first step that would lead to the sought after tomb on November 4th 1922. The artifacts discovered in the tomb reveal the domestic life of the ancients, jewelry, spiritual beliefs and the art of mummification three thousand years ago. 1490 words ...read more.