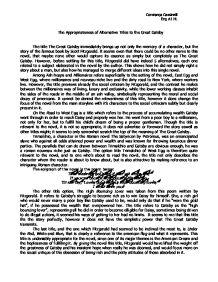 The Appropriateness of Alternative Titles to the Great Gatsby

The Appropriateness of Alternative Titles to the Great Gatsby The title The Great Gatsby immediately brings up not only the memory of a character, but the story of the famous book by Scott Fitzgerald. It seems even that there could be no other name to this novel, that maybe none other would capture its essence as simply but completely as The Great Gatsby. However, before settling for this title, Fitzgerald did have indeed 5 alternatives, each one related to a subject elaborated in the novel by the author. This shows how he did not simply right a story about a man, but also how he managed to merge different ideas into this single novel. Among Ash-heaps and Millionaires refers superficially to the setting of the novel, East Egg and West Egg, where millionaires and nouveau-riche live and the dirty road to New York, where workers live. ...read more.

Trimalchio, a character in the Roman novel The Satyricon by Petronius, was an emancipated slave who against all odds attained power and wealth and was known for throwing luxurious dinner parties. The parallels that can de drawn between Trimalchio and Gatsby are obvious enough, he was a roman nouveau riche just as Gatsby. The option title Trimalchio of West Egg is therefore quite relevant to the novel, and to one who's about to read the novel, the title not only describes the character whom the reader is about to know about, but is also attractive by making reference to an intriguing Roman character. The epigraph of the novel is the poem below: Then wear the gold hat, if that will move her; If you can bounce high, bounce for her too, Till she cry, 'Lover, gold-hatted, high-bouncing lover, I must have you!' ...read more.

This title is undeniably appropriate for the novel, since one of its major themes is the American Dream and the hoplessness of fullfiling it. By giving the novel this title, Fitzgerald would have lifted the weight off the greatness of Gatsby and his insistent hope when really he was doomed, and would focus more on the social critique of the obsession of being rich and the petty attitudes of those absorbed in it. The Great Gatsby title itself seems to join all of the titles in one, but is focused specially on the perseverance and hope Gatsby maintained until his surprising death. Even though he seems a bit naive in the middle of the conspiratory world of wealth, his true sentiments do indeed invoke the appropriateness of calling the character "Great", who's essence remained unchanged even after all the wealth and status. Hence, the present title appears to fit perfectly with the novel, and has played a part in making it memorable. Constan�a Cassinelli Eng A1 HL ...read more.