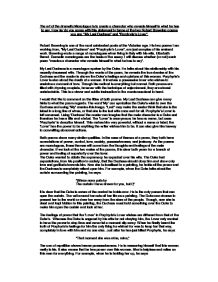 The art of the dramatic Monologue is to create a character who reveals himself in what he has to say. How far do you agree with this statement in terms of the two Robert Browning poems you are:

The art of the dramatic Monologue is to create a character who reveals himself in what he has to say. How far do you agree with this statement in terms of the two Robert Browning poems you are: "My Last Duchess" and "Porphyria's Lover". Robert Browning is one of the most celebrated poets of the Victorian age. His two poems I am working from, "My Last Duchess" and "Porphyria's Lover", are just samples of his eminent work. Browning wrote a range of monologues when living in Italy with his wife, Elizabeth Barret. Dramatic monologues are the basis of the essay. I will discuss whether (or not) each poem "creates a character who reveals himself in what he has to say". My Last Duchess is a monologue spoken by the Duke. He talks about his relationship with his recently deceased wife. Through the words of the poem, he reveals the true demise of the Duchess and the reader is shown the Duke's feelings and opinions of this woman. Porphyria's Lover is also about the death of a woman. It involves a possessive lover who wishes to enshrine a moment of love. Though his method is everything but normal. Both poems are filled with rhyming couplets, however with the technique of enjambment, they are almost undetectable. This is a clever and subtle insinuation to the murderous deed in hand. I would first like to comment on the titles of both poems. My Last Duchess can give many hints to what the poem regards. The word 'My' can symbolise the Duke's wish to own the Duchess and using "My" creates this image. "Last" may make the reader think that she is the latest in a long line of wives, or that she is the last wife once and for all. Porphyria's Lover is left unnamed. Using 'Duchess' the reader can imagine that the male character is a Duke and therefore he has a title and a label. ...read more.

When complaining of this same thing, he commented on this very thing in comparison with his own proposal: "as if she ranked My gift of a nine-hundred-years-old name With anybody's gift." The "nine-hundred-years-old name" he speaks of, is a marriage proposal and the chance to have his surname as her own. This, he saw as the most superlative gift that could be given. What the Duke fails to understand is his wife's mind and how she classes things differently to him. As the Duke becomes lost in his own anger, I feel that he is quite unaware that he is slowly enlightening the reader/listener on his veritable form. He seems extremely conceited in reference to the marriage proposal. He feels there could be no better offer given to her, yet she still doesn't give him the gratitude he thinks he deserves. He is also very pretentious when deciding how to deal with his wife's flippant behaviour. When talking to his listener about his thoughts on actions that should be taken, he declares: "I choose Never to stoop." The Duke feels that it is beneath him to even think of telling her to change her frivolous ways. He wished her to be 'lessoned' by her own accord and not with him telling her his opinions. I think the Duke believed that because of his high status, he should not need to lower himself in becoming a teacher of righteous ways. However, his choosing not to "stoop", leads to him committing a grave sin, to make his notion clear to her once and for all. He speaks of her smiling to all passers by and how this smiled did not differ when he passed her. He says: "Oh sir, she smiled, no doubt, Whene'er I passed her; but who passed without Much the same smile?" I think the Duke did find the Duchess beautiful and this is one reason behind the painting made of her. ...read more.

The last two lines of the poem are deplorable in Browning's religious society. The Lover feels that if his behaviour was indeed immoral, God would have condemned him by now, saying: "And thus we sit together now, And all night long we have not stirred, And yet God has not said a word!" The Victorian period was extremely religious and this would have been a shocking thing to write, as murder is a sin not to go against. It also sounds as if Browning himself does not condemn this man for his actions, or finds them acceptable. I feel both poems do have a character that reveals him in what they have to say. Similarly, the language and structure of each poem can give hints to their characters. Both men, however, are very different. The Duke is obsessively jealous and longs for power above everyone else. He reveals himself unintentionally, letting himself become angered by his late wife's behaviour and thus letting the mask slip away revealing the man he truly is. The anonymous Lover is possessively insane. He is driven only by his love for Porphyria. He feels restrained by society and feels that the moment she declares she is his; he cannot let it slip away. Time is against him and he had to find some way of keeping her perfectly preserved and unchanged. The Lover also reveals his rebellion against religion and God, thinking that God will not condemn him, as his deed was not wrong. I prefer Porphyria's Lover to My Last Duchess, as the Duke is terribly arrogant and pedantic. The Lover, I believe, truly loved Porphyria with all his heart, though it is baffling why he felt death was the only option. Whereas the Duke, did not love his wife but saw her as a possession to show off in front of people. The painting must surely work the way he wants it, as it is another thing to show off. ...read more.