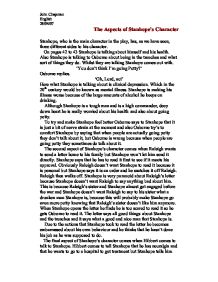 The Aspects of Stanhope's Character

The Aspects of Stanhope's Character Stanhope, who is the main character in the play, has, as we have seen, three different sides to his character. On pages 42 to 43 Stanhope is talking about himself and his health. Also Stanhope is talking to Osborne about being in the trenches and what sort of things they do. Whilst they are talking Stanhope comes out with. 'You don't think I'm going Potty?' Osborne replies. 'Oh, Lord, no!' Here what Stanhope is talking about is clinical depression. Which in the 20th century would be known as mental illness. Stanhope is making his illness worse because of the large amounts of alcohol he keeps on drinking. Although Stanhope is a tough man and is a high commander, deep down heart he is really worried about his health and also about going potty. ...read more.

Raleigh then walks off. Stanhope is very paranoid about Raleigh's letter because Stanhope doesn't want Raleigh to say anything bad about him. This is because Raleigh's sister and Stanhope almost got engaged before the war and Stanhope doesn't want Raleigh to say to his sister what a drunken man Stanhope is, because this will probably make Stanhope go even more potty knowing that Raleigh's sister doesn't like him anymore. When Stanhope opens the letter he finds he is too scared to read it so he gets Osborne to read it. The letter says all good things about Stanhope and the trenches and it says what a good and nice man that Stanhope is. Due to the actions that Stanhope took to read the letter he becomes embarrassed about his own behaviour and he thinks that he hasn't done his job as he was supposed to do. ...read more.

Stanhope tells Hibbert that he is in the same condition as him and this morally lifts Hibbert and so Stanhope coaxs' Hibbert into staying in the trenches with the other men. One of the things that Stanhope says so Hibbert is that 'if you go, will you be able to look yourself in the mirror and not see yourself as a coward.' 'If you stay you may get shot a die or you may life until the end of the war and then you will be able to go home to your family knowing that you fought like a real man. Stanhope's three aspects were that deep down inside of him Stanhope is just as scared as the next man and although Stanhope is a high commander he still makes mistakes and is able to embarrass himself and also Stanhope knows how to make men out of boys. John Chapman English 07/10/01 ...read more.