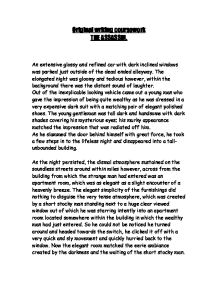 Original writing coursework THE ASSASSIN. An extensive glossy and refined car with dark inclined windows was parked just outside of the dead ended alleyway. The elongated night was gloomy and tedious however, within the background there was the distant sound of laughter. Out of the inexplicable looking vehicle came out a young man who gave the impression of being quite wealthy as he was dressed in a very expensive dark suit with a matching pair of elegant polished shoes. The young gentleman was tall dark and handsome with dark shades covering his mysterious eyes; his murky appearance matched the impression that was radiated off him. As he slammed the door behind himself with great force, he took a few steps in to the lifeless night and disappeared into a tall-unbounded building. ...read more.

Now the elegant room matched the eerie ambiance created by the darkness and the waiting of the short stocky man. As he was wearing tight black clothes, he was camouflaged within the dark eeriness of the room itself. He had a very distinctive scar on his face and a very intense gaze from his piercing blue devil like eyes, eyes of a callous person; in addition, he had a small stubby nose like his bodily appearance, very diminutive dark spiky hair and finally light brown skin. The undersized guy opened the window at a perfect angle. As soon as he saw a flicker of light from the apartment, his eyes automatically zoomed into target mode. Abruptly the stumpy man knelt down, reached into a long shady bag by his foot, and pulled out a colossal firearm. ...read more.

The short stocky man packed his firearm back into the lengthy dark bag and silently shut the window, closed the door of the apartment and headed down the stairs, yet he remained cool and calm like nothing had ever happened. The intensity of the night persisted although somewhere in the distance a dog barked, but that sound was drowned away by the roar of the starting of the vehicle into which the short stocky man had just entered. He acting ordinarily making sure, he left no trace of himself and that he did not exist on the night, and believing that his actions did not affect the society in anyway possible. His presence left behind a cold heart aching scene even though he was invisible and disappeared into the cold dampness of the night his engine heard slightly by the tranquility of the monotonous night........ ...read more.