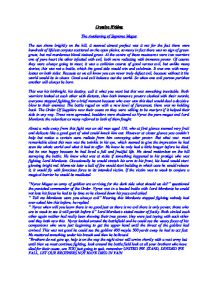 The Awakening of Supreme Magus.

Creative Writing The Awakening of Supreme Magus The sun shone brightly on the hill, it seemed almost perfect was it not for the fact there were hundreds of lifeless corpses scattered on the open plains, so many in fact there was no sign of green grass, but red murderous blood stained grass. At the centre of these massacres were two warriors one of pure heart the other infested with evil, both were radiating with immense power. Of course they were always going to meet, it was a collision course of good versus evil, but unlike many stories, this was not a battle, which the good side would win and celebrate. It was one with many losses on both sides. Because as we all know you can never truly defeat evil, because without it the world would be in chaos. ...read more.

However at closer glance you couldn't help but notice a certain aura radiate from him conveying utter power. But what was most remarkable about this man was the twinkle in his eye, which seemed to give the impression he had seen the whole world and what it had to offer. He knew he only had a little longer before he died, but he was happy because he had lived a full and fruitful life. He stood motionless on the hill surveying the battle. He knew what was at stake if something happened to his prot�g� who was fighting Lord Mordante. Occasionally he would stretch his arm to his front, his hand would start glowing bright red. Moments later a ball of fire would start building in which case he would release it, it would fly with ferocious force to its intended victim. ...read more.