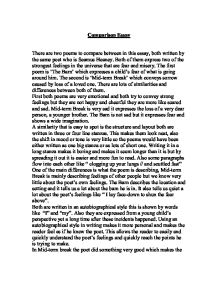 Comparison Essay There are two poems to compare between in this essay, both written by the same poet who is Seamus Heaney. Both of them express two of the strongest feelings in the universe that are fear and misery. The first poem is 'The Barn' which expresses a child's fear of what is going around him. The second is 'Mid-term Break' which conveys sorrow caused by loss of a loved one. There are lots of similarities and differences between both of them. First both poems are very emotional and both try to convey strong feelings but they are not happy and cheerful they are more like scared and sad. Mid-term Break is very sad it expresses the loss of a very dear person, a younger brother. The Barn is not sad but it expresses fear and shows a wide imagination. A similarity that is easy to spot is the structure and layout both are written in three or four line stanzas. ...read more.

This line is written alone to emphasize on it and to make sure that all the readers get the point he is trying to make by this statement. On the other hand The Barn's ending has nothing special it could have flowed on to more but it leaves the reader in suspense by saying " the two lugged-sacks moved in like great blind rats" this makes the reader wonder what would happen next. So actually it leaves the reader with a kind of a mystery to deal with and a question which is looking for an answer a question like what will happen next? One of Seamus Heaney's strengths is his ability to create vivid images in your mind using words. Using similes, metaphors and personification these words make you imagine the scene and what is going around. He uses the three kinds in both poems and uses them quite often. In " The Barn" he says " The roof gulfed in" gulfed is an action so how could the roof have gulfed? well it is personification, he made the roof (object) ...read more.

In " Mid-Term Break" there is no rhyme scheme at all the words don't even sound similar. Rhyming line make poems seem quiet cheerful and happy but this is not the feeling Heaney wanted us to feel. I think this is why he didn't use any rhyming lines to make is sader. Both poems have very good endings yet each poem's ending has a different purpose, in Mid term Break the ending reveals information which wasn't known before while on the other hand in "the Barn" the ending is intriguing and doesn't tell you what happens next. The last line of Mid-term break is a very good line " a four foot box, a foot for every year" it is written alone to emphasize on it and its meaning. It is a truly good way to end such a great poem, it reveals a very sad fact which wasn't mentioned before. "the Barn" has a more mysterious ending, it leaves some thoughts for your own imagination it gives you a chance to think of what could happen next. ...read more.