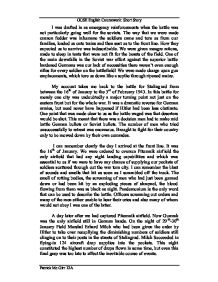 The battle for Stalingrad from between the 16th of January to the 3rd of February 1943.

I was drafted in as emergency reinforcements when the battle was not particularly going well for the soviets. The way that we were made cannon fodder was inhumane the soldiers came and tore us from our families, loaded us onto trains and then sent us to the front line. How they expected us to survive was indescribable. We were given meagre rations, made to sleep in tents that were not fit for the beasts of the field. One of the main downfalls in the Soviet war effort against the superior battle hardened Germans was our lack of necessities there weren't even enough rifles for every soldier on the battlefield! We were made charge upon gun emplacements, which tore us down like a scythe through ripened maize. My account takes me back to the battle for Stalingrad from between the 16th of January to the 3rd of February 1943. In this battle for merely one city was undoubtedly a major turning point not just on the eastern front but for the whole war. ...read more.

The smell of rotting bodies, the screaming of men who had just been gunned down or had been hit by an exploding pieces of shrapnel, the blood flowing from them was as black as night. Pandemonium is the only word that can be used to describe the battle. Officers screaming out orders and many of the men either unable to hear their cries and also many of whom would not obey I was one of the latter. A day later after we had captured Pitomnik airfield. Now Gumrak was the only airfield still in German hands. On the night of 29th-30th January Field Marshal Erhard Milch who had been given the order by Hitler to take over resupllying the diminishing numbers of soldiers still clinging on to their posts in the streets of Stalingrad. Milch Succeeded in flying-in 124 aircraft drop supplies into the pockets. This night constituted the highest number of drops flown in some time, but even this final gasp was too late to affect the inevitable course of events. ...read more.

Although many died due to lack of food and the typhus epidemic in the spring of 1943 only 5,000 troops made it back to Germany long after the war was over. And now as I sit here I remember many of my fellow comrades, who fell during the battle. I remember their final gasps...perhaps I could have done something.... But I was much too scared to react, men falling around me, their blood changing the colour of the brickwork streets from a dreary grey to a hellish red. I sat holding my rifle, in a trance, everything was just a blur, the sounds mumbled, no wonder I was court-martialled my actions during the battle. I was more of a burden to my commanding officers than a help. I did not obey their commands because I knew that of 1000 men who charge upon German posts only 10 may survive some of whom who would have been seriously injured. I now know that war is just sheer hell and something that I can ensure I will not be part of again. GCSE English Coursework: Short Story Patrick Mc Girr 12A ...read more.