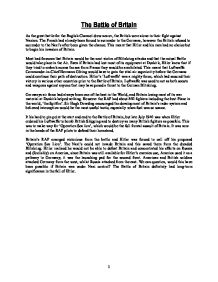 The Battle of Britain.

The Battle of Britain As the great battle for the English Channel drew nearer, the British were alone in their fight against Nazism. The French had already been forced to surrender to the Germans, however the British refused to surrender to the Nazi's after been given the chance. This meant that Hitler and his men had no choice but to begin his invasion of Britain. Most had foreseen that Britain would be the next victim of Blitzkrieg attacks and that the actual Battle would take place in the Air. Even if Britain had lost most of its equipment at Dunkirk, Hitler knew that if they tried to embark across the sea from France they would be annihilated. This meant that Luftwaffe Commander-in-Chief Hermann G�ring would have to gain the vital air superiority before the Germans could continue their path of destruction. Hitler's 'Luftwaffe' was a mighty force, which had secured their victory in various other countries prior to the Battle of Britain. Luftwaffe was used to act as both scouts and weapons against anyone that may have posed a threat to the German Blitzkrieg. Germanys air force had always been one of the best in the World, and Britain losing most of its war material at Dunkirk helped nothing. However the RAF had about 850 fighters including the best Plane in the world, 'the Spitfire'. Sir Hugh Dowding encouraged the development of Britain's radar system and believed interception would be the most useful tactic, especially when fuel was so scarce. It his hard to pin point the start and end to the Battle of Britain, but late July 1940 was when Hitler ordered his Luftwaffe to bomb British Shipping and to destroy as many British fighters as possible. This was to make way for 'Operation Sea lion', which would be the full frontal assault of Britain. It was now in the hands of the RAF pilots to defend their homeland. ...read more.

Written by Sir Arthur Bryant. It was written after the war so the outcome was certain. The Daily Graphic was one of the most popular newspapers and was widely read at the time. Sir Bryant suggests that there was more to Britain's "finest hour" than the traditional few brave pilots. The popular myth is still mentioned but he mentions Britain's advanced radar system and Hugh Dowding's leadership. The aircrafts owned by Britain were the best in the world (especially the Spitfire, with it's exceptional manoeuvrability). The spitfire was equipped with eight .303 machineguns which means, combined with their speed they were a formidable force. Britain's radar system gave their troops the essential 'edge' over the Germans, not the pilots. After all, the air ministry had refused Dowding's idea of yearlong training, so these pilots had very little experience so it would be very unlikely for them to win in a straight fight. Sir Hugh Dowding was ultimately devoted to his work, which made him an important figure during the battle, but he was disliked in the RAF for being unsociable and sarcastic, so Churchill did not use him as a propaganda figure. The reason the newspaper begins to mention the new ideas was that the war was essentially over and now it was time to present the facts not the propaganda. However it does show sensitivity by not mentioning it wasn't as important as Churchill said, and holds back things that might dishonour those dead or dying as a result of the war. After all, the memories were still fresh in people's minds and now were not the time to completely anger the nation. This newspaper was read by the majority, which is why it holds back such information. These newspapers still had an essence of propaganda and that is evident 'Never had men been so superbly trained to exercise it'. This interpretation was written by a well-known historian and this is evident by the way he specifically mentions certain planes and tactics, which make the text much more informed. ...read more.

Yet Hitler had various plans of invading Russia, which was the threat to the Nazi's. Many people say that Hitler wasn't that bothered about losing a few hundred Troops in the air to Britain. He had never been serious about invading Britain; he had theoretically defeated it already when they fled from the beaches of Dunkirk leaving behind millions of pounds worth of equipment, ammunition and weaponry. If Dowding hadn't begun creating aircraft reserves the British could have done very little to rebel. I doubt that Hitler could have been too bothered about the Battle of Britain, since by 1941 he sent 3 million Axis to invade the USSR. Blitzkrieg was useless in the terrain and large scale of the Soviet. The soviet army had over 4.5 million troops, and yet Churchill suggested it was Britain's minor air war that saved the world from Nazism. This was the real war which makes me think the Battle of Britain was important for Britain, but not for the war. However one thing that makes me disagree, is that the 'sacrifice' did make Roosevelt's people sympathize. Pearl harbour encouraged America to enter the war more so, this is when Britain did become useful providing the pathway. I do think though, America could have won the war with Russia's help even if Britain had been seized. The Battle of Britain had great significance in allowing Britain to contribute what they could to the war, and eventually helps out America whilst attacking from the west. Without these young men to continue Britain's war effort, it is possible German could have used us as a pathway to America and crushed America from the east, whilst Japan attacked from the west. This might have eliminated all World powers except Russia who they could then take out. It is still significant that the Battle of Britain was the first defeat faced by Hitler, which perhaps made it the beginning of the end of Nazism and Hitler's fascist ideas. Laurence Gazi 11T 1 ...read more.