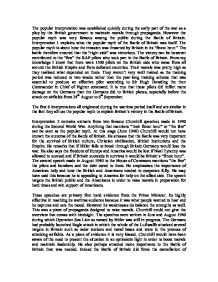 The Battle of Britain

The popular interpretation was established quickly during the early part of the war as a ploy by the British government to maintain morale through propaganda. However the popular myth was very famous among the public during the Battle of Britain. Interpretation 1 explains what the popular myth of the Battle of Britain was itself. The popular myth is about how the invasion was thwarted by Britain in its "finest hour." The battle therefore ensured that the "right side" was victorious. The victory can be however contributed to the "few" the RAF pilots who took part in the Battle of Britain. From my knowledge I know that there were 1500 pilots on the British side who came from all around the British Empire and from defeated countries. Their morale was pretty high as they realized what depended on them. They weren't very well trained as the training period was reduced to two weeks rather than the year-long training scheme that was essential to produce an effective pilot according to Sir Hugh Dowding the then Commander in Chief of Fighter command. It is true that these pilots did inflict more damage on the Germans than the Germans did to British planes, especially before the attack on airfields from 24th August to 6th September. The first 6 interpretations all originated during the wartime period itself and are similar in the fact they all use the popular myth to explain Britain's victory in the Battle of Britain. Interpretation 2 contains extracts from two famous Churchill speeches made in 1940 during the Second World War. Anything that mentions "their finest hour" or "the few" can be seen as the popular myth. At this stage (June 1940) Churchill would not have known the outcome of the Battle of Britain. He stresses that the Battle was very important for the survival of British culture, Christian civilization, British institutions and the Empire. ...read more.

He was rather unsociable and very dedicated to his work. He believed that fighters and not bombers would win it for the allies and therefore built a sufficient fighter force. He also mentions the efforts of the ground crew. He was a popular historian chosen to write for the Daily Graphic and was very traditional and patriotic. He inserts his own views and responds well to his audience. He mentions other factors in the victory. As a historian he has also evaluated his evidence carefully. However he is quite biased and very nationalistic. It is partly propaganda as it was printed in a newspaper and the war wasn't quite over yet although its outcome was quite certain. Interpretation 8 is an official history of the Second World War written in 1957. The writer stresses the importance of the Battle of Britain. He raises the issue whether the Battle of Britain was merely a sideline and the real issue was Russia. We do know that after the cancellation of Operation Sea Lion Hitler did turn his attention to Russia and in June 1940 he finally attacked. It was written in 1957 so it can give an overview because the war had been over for a few years. He considers other factors for the victory beyond one view. As a historian his work is well-researched, evaluated and providing balanced conclusions. However there is still reference to "the few" and it is an official history therefore the Government can use it for propaganda and it does contain a certain element of bias. Interpretation 9 is a book called "Europe since Napoleon", 1957 by David Thomson. It is a long survey of history of Europe between1815 and the 1950's. Thomson states that Hitler was not just concerned with the invasion of Britain, but the invasion of Russia. He gives a number of reasons for the British victory, not just the pilots but the planes and radar. ...read more.

It is biased as it provides the German view and they lost. However in another sense I believe "their finest our" can be used in terms of morale. The people's commitment to the war can be measured by the making of Observer Corps which helped immensely during the war and the giving up of Aluminum pots and pans. The morale of the British pilots was extremely high throughout the Battle of Britain as they did realize what depended on them. This view is confirmed by Richard Hillary's autobiography in interpretation 3. He talks of the comrade atmosphere and the teamwork of the pilots and mentions many brave and courageous incidents. His account is primary and is a witness account and therefore reliable if slightly biased. However this interpretation does introduce the popular myth slightly in terms of the "few". I believe that the pilots did do a tremendous job and do deserve praise but as earlier said there were other factors playing a part in the Battle of Britain. Therefore I believe the popular myth has been blown out of proportion however there is a fair amount of substance if we consider "the few" in the sense of bravery and discipline and "their finest hour" in terms of public and pilot morale. However a true interpretation would need to include other factors such as Russia, America and German mistakes. However the triumph of right over evil aspect of the popular myth is spot on as the world would no doubt have been a worse place had the Germans won the war. This view backed up by Churchill speeches of 1940 in interpretation 2 where he says the whole world will suffer from "perverted science" and "sink into the abyss of a new Dark Age" which basically means the world would plunge into disaster and sinking prosperity. His view is biased however it is primary first hand experience and he would have been making this speech for the public who would need a reason against the Germans. ...read more.