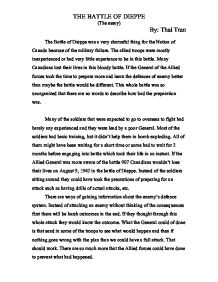 The Battle of Dieppe.

THE BATTLE OF DIEPPE (The essay) By: Thai Tran The Battle of Dieppe was a very shameful thing for the Nation of Canada because of the military failure. The allied troops were mostly inexperienced or had very little experience to be in this battle. Many Canadians lost their lives in this bloody battle. If the General of the Allied forces took the time to prepare more and learn the defences of enemy better than maybe the battle would be different. This whole battle was so unorganized that there are no words to describe how bad the preparation was. Many of the soldiers that were expected to go to overseas to fight had barely any experienced and they were lead by a poor General. ...read more.

Instead of the soldiers sitting around they could have took the precautions of preparing for an attack such as having drills of actual attacks, etc. There are ways of gaining information about the enemy's defence system. Instead of attacking an enemy without thinking of the consequences first there will be harsh outcomes in the end. If they thought through this whole attack they would know the outcome. What the General could of done is that send in some of the troops to see what would happen and then if nothing goes wrong with the plan than we could have a full attack. That should work. There are so much more that the Allied forces could have done to prevent what had happened. ...read more.

(The Rhine land, Poland, the Sara region etc.) Since the Allied forces know that the Nazis has concurred that many land they should be more and well prepared instead of throwing them soldiers out to die like what they did. Since they didn't prepare enough for this battle 1,946 Allied soldiers were captured many of them were Canadian. The Dieppe Battle could have had a better outcome if only the Allied forces could understand the meaning of preparation. We wouldn't have lost so many lives if the soldiers had a better training and a better leader to lead them through the battle. They rushed things and therefore had the worst outcome possible and that is losing the battle and losing innocent lives that could have been saved. ...read more.