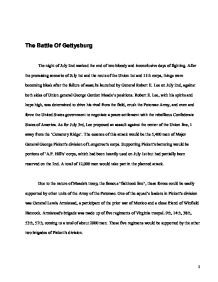 The Battle Of Gettysburg

The Battle Of Gettysburg The night of July 2nd marked the end of two bloody and inconclusive days of fighting. After the promising scenario of July 1st and the route of the Union 1st and 11th corps, things were becoming bleak after the failure of assaults launched by General Robert E. Lee on July 2nd, against both sides of Union general George Gordon Meade's positions. Robert E. Lee, with his spirits and hope high, was determined to drive his rival from the field, crush the Potomac Army, and even and force the United States government to negotiate a peace settlement with the rebellious Confederate States of America. As for July 3rd, Lee proposed an assault against the center of the Union line, 1 away from the 'Cemetery Ridge'. The essence of this attack would be the 5,400 men of Major General George Pickett's division of Longstreet's corps. Supporting Pickett's battering would be portions of 'A.P. Hill's' corps, which had been heavily used on July 1st but had partially been reserved on the 2nd. A total of 12,000 men would take part in the planned attack. Due to the nature of Meade's troop, the famous "fishhook line", these forces could be easily supported by other units of the Army of the Potomac. ...read more.

Almost immediately, as the Confederates left the tree line behind, it came under gunfire, which increased, as the attackers got closer to their objective. Years later in 1894, an officer of the 9th Virginia, James F. Crocker, reminisced and noted: "Our men moved with quickstep as calmly and orderly as if they were on parade. No sooner than our line came in full view, the enemies batteries in front, on the right and on the left, from Cemetery Hill to Round Top, opened on them with a concentrated, accurate and fearful fire of shell and solid shot. These plowed through or exploded in our ranks, making great havoc." The three attacking divisions already suffered numerous casualties used a short break to realign the ranks and change direction. They were about 100 meters from the tip of 'Cemetery Ridge'. As soon as the troops resumed their march they would be be greeted by 95 pieces of artillery, located in a line from 'Cemetery Hill' to 'Little Round Top'. By the time 'Longstreet's' columns had reached this position, they had some casualties. Two of Pickett's brigade commanders; Kemper and Garnet had been knocked out and could not continue. ...read more.

The final moment has come when there must be instant flight, instant surrender or instant death. Each alternative is shared. . . All is over. As far as possible for mortals they approached the accomplishment of the impossible. Their great feat of arms is closed. The charge of Pickett's division has been proudly, gallantly and right royally delivered." Lee's gambit had failed. The divisions of Pickett, Pettigrew and Trimble suffered 6,500 casualties, which made up 60% of the attacking force. In Pickett's division, all of his 15 commanders had been killed or wounded. Two brigade commanders, Armistead and Garnett, and six colonels were all perished. Armistead's brigade alone had 1,200 killed, wounded or missing. Crocker's 9th Virginia had started off with 277 effectives and lost 177 men, almost 70% of its total. Every field officer of field grade was killed or wounded. Major Crocker was the highest ranking officer to survive unhurt. Robert E. Lee gave his all and made no efforts to deny the blame. "It was all my fault," he repeated again and again as officers came to him. Then he urged them to do the best "we can toward saving what is left us." This marked the end to the Battle of Gettysburg. On July 4th, 1863 the Army of Northern Virginia finally began its long unfruitful journey back home. 1 ...read more.