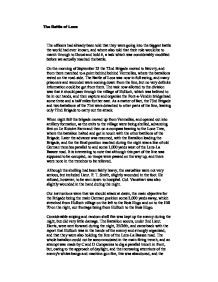 The Battle of Loos.

The Battle of Loos The officers had already been told that they were going into the biggest battle the world had ever known, and where also told that their role would be to march through to Douai and hold it, a task which was considerably modified before we actually reached the battle. On the morning of September 25 the 72nd Brigade moved to Beuvry, and from there marched to a point behind behind Vermelles, where the battalions rested on the road-side. The Battle of Loos was now in full swing, and many prisoners and wounded were coming down from the line, but no very definite information could be got from them. The task now allotted to the division was that it should pass through the village of Hulluch, which was belived to be in our hands, and then capture and organise the Pont-a-Vendin bridgehead some three and a half miles further east. As a matter of fact, the 73rd Brigade and two battalions of the 71st were detached to other parts of the line, leaving only 72nd Brigade to carry out the attack. When night fell the brigade moved up from Vermelles, and opened out into artillery formation, as the exits to the village were being ...read more.

We were to leave Hulluch village on our left, and it would be dealt with by the troops on our flank. Punctually at 11 o'clock the first wave, with B and D Companies in the front line, left our trenches,followed at short intervals by the subsequent waves. The 9th East Surreys were on our right, and the 8th Buffs (right) and the 8th Queen's (left) were in support. Instead of a whole division on our left, a handful of some fifty to seventy-five men, belonging to a Welsh regiment, alone left our trenches, the orders apparently having arrived to late, while the right flank of the East Surreys also appears to have been in the air. The ground to be covered sloped gradually down to the Lens- La Bassee road, and from there rose to the main German positions, about 1,100 yards beyond, near the crest of Hill 70. The attack was carried out at a marching pace in order to save the men's breath for the final charge and bayonet work, and the advance was so steady and the formations so regular that it looked more like a field day at Aldershot that part of a great battle. ...read more.

the one brigade the fire of the artillery and small arms which would normally have been used on the front of three divisions. Many men made gallant attempts to get through the wire, 2nd. Lieut. Don being killed when half-way through. The remainder dropped to the ground where they were and returned the heavy fire from the enemy's trench. The situation, however, was hopeless. In front was an impenetrable belt of wire, and the line, such as what was left of it, raked with rifle and machine-gun fire from the front and both flanks, and enfiladed by an equally deadly artillery fire. What were the men to do? Turn to their officers for orders? Out of the twenty-five officers who had left our trench little more than an hour before, only one was un hit. To stay where they were, outflanked on both sides, was impossible, and the poor remnant of that gallant Battalion was forced to make is way back to the line of German trenches from which it had started. Taken from "The History of the Eighth Battalion The Queen's Own Royal West Kent Regiment 1914-1919" Printed privately for the battalion by Hazel,Watson & Viney, LD. In 1921. Used with out permission from the author ...read more.