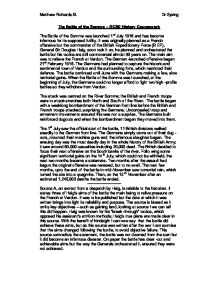 The Battle of the Somme - source related study.

The Battle of the Somme - GCSE History Coursework The Battle of the Somme was launched 1st July 1916 and has become infamous for its supposed futility. It was originally planned as a French offensive but the commander of the British Expeditionary Force (BEF), General Sir Douglas Haig, soon took it on, he planned and orchestrated the battle but his tactics are still controversial almost 90 years on. The main aim was to relieve the French at Verdun. The German-launched offensive began 21st February 1916. The Germans had planned to capture the historic and sentimental town of Verdun and the surrounding forts, which restricted their defence. The battle continued until June with the Germans making a few, slow territorial gains. When the Battle of the Somme was launched, at the beginning of July, the Germans could no longer afford to fight two high-profile battles so they withdrew from Verdun. The attack was centred on the River Somme; the British and French troops were to attack stretches both North and South of the River. The battle began with a weeklong bombardment of the German front line before the British and French troops attacked, surprising the Germans. Unconcealed troop and armament movements ensured this was not a surprise. The Germans built reinforced dugouts and when the bombardment began they moved into them. ...read more.

the House of Lords.) However this source does not seem to show this dislike, Lloyd George is praising Haig but I question his motives, at this point in his political career he was looking to replace Asquith as the next Prime Minister and this brings into light the real motives behind this letter. Perhaps it was election propaganda? Lloyd-George, as Minister of Armaments, would have only been shown certain stretches of the front line and this maybe why he has come to the conclusion apparent in this source, it is true that the battle did see territorial gains around this date and it maybe this that Lloyd-George is referring to. I believe this source contradicts the statement; it talks about the battle being a success of sorts and for this reason I can only conclude that it contradicts the source. Source E, supports objective 3 in source A. Erich Ludendorff, an influential German General wrote it and it seems to reiterate the fact that the entente troops did inflict much damage on the Germans. It is possible that the General is justifying his defeat and so this brings into light the reliability of the source as does the reason for Ludendorff writing "My War Memoirs," over-all it maybe a biased book. Ludendorff experienced the battle first hand so this is a primary source. ...read more.

The soldiers would not have seen the battle in terms of objectives unlike the Generals, he would have been pre-occupied by his battalion and his own life, for him the battle would have been a futile exercise. We are not given a date as to when this source was published but it may have been influenced my modern opinion against the war. This source is of great contrast to the opinions expressed in sources E, C and D this source talks very negatively about the tactics employed by the Generals whereas the Generals seem confident and have a disregard for life. This source clearly supports the statement; the battle was an unprecedented disaster. In conclusion, the Somme was a terrible disaster in terms of loss of life and the damage to the reputation of the British army but it was also a success in the sense that is relieved the French at Verdun and it wore down the Germans mental and physical strength. The Battle of the Somme did gain some territory, (source I) but the greatest thing that the battle achieved was experience for the British army. To conclude the sources given, which provide a very narrow view on the battle, both support and contradict the statement so the battle was a great success in its positive aspects but it was also an infamous failure in its negative aspects. Matthew Richards 5L Dr Spring ...read more.