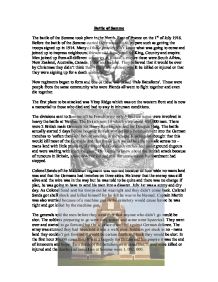 Battle of Somme The battle of the Somme took place in the North- East of France on the 1st of July 1916. Before the battle of the Somme started there was a lot to prepare such as getting the troops signed up in 1914. Many of these people didn't know what was going to come and joined up to impress neighbours, friends and family and for King, Country and empire. Men joined up from all different countries in Britain's empire these were South Africa, New Zealand, Australia, Canada, India and Ireland. They believed that it would be over by Christmas they didn't think that 91% of the soldiers would be killed or injured or that they were signing up for a death sentence. ...read more.

The British sent 14 which were about 400,000 men. There were 2 British main Generals Sir Henry Rawlingson and Sir Douglas Haig. The battle actually started 5 days before because British sent artillery bombardment into the German trenches to 'soften them up' before sending in the troops. Rawlingson thought that this would kill most of the Germans and that the British would be able to walk across no - mans land with little problem. He forgot the German trenches had underground dugouts and were waiting with machine guns. The Germans knew about the British attack because of rumours in Britain, spies, observation and that the ammunition bombardment had stopped. Colonel Sands of the Middleset regiment was worried because of how wide no mans land was and that the Germans had trenches on three sides. ...read more.

Captain Martin was also worried because of a machine gun in the cemetery would cause havoc he was right and got killed by the machine gun. The generals told the men before they went over that anyone who didn't go would be shot. The soldiers preparing to go were very scared and some went hysterical. They went over and started to go forward but the advance crumbled against German defence. The army was stunned they had been told it was a walk over. Soldiers got stuck in no -mans land they couldn't got forward it would be certain death and back they would be shot. In the first hour 30,000 casualties. It was a tragedy for Britain and her empire it was the end of innocents and hope. Two thirds of the battalion were casualties 3/4 men were killed or injured and the deaths and casualties at Somme were 1, 002, 000. ...read more.