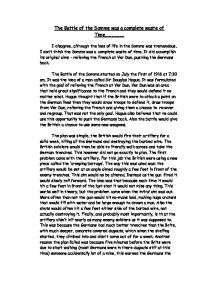 The idea was that because each time it would hit a few feet in front of the last shot it would not miss any thing. This works well in theory, but the problem came when the initial aim was out. More often than not the gun would hit no-mans land, making huge craters that would fill with water and be large enough to drown a man. Also the shots would often hit a few feet either side of the barbed wire, not actually destroying it. Finally, and probably most importantly, is that the artillery didn't kill nearly as many enemy soldiers as it was supposed to. This was because the Germans had much better trenches than the Brits, with much deeper, concrete covered dugouts, which when the shelling started, they climbed into and didn't come out of for a week. ...read more.

Of coarse it was not all bad. Firstly, the battle gave the British a chance it use the tank for the first time and although it wasn't entirely successful this time it was later used to great affect and still is now. Also the Somme allowed the British to gain a total of 10 km into what was previously German space. Also, although the British losses were great the German losses were still considerably higher in the end. In conclusion, I think the battle of the Somme was not a complete waste of life. I believe there were a lot of casualties - more than there should have been but it did help us to win the war in the end. I do believe however that if the plan had been more 'fine tuned' then the campaign would have been eve more successful for fewer lives lost. ...read more.