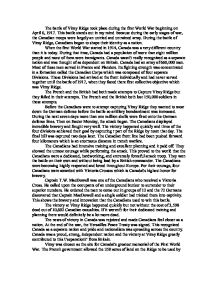 The battle of Vimy Ridge took place during the first World War beginning on April 6, 1917.

The battle of Vimy Ridge took place during the first World War beginning on April 6, 1917. This battle stands out in my mind because during the early stages of war, the Canadian troops were largely an untried and untrained army. During the battle of Vimy Ridge, Canadians began to shape their identity as a nation. When the first World War started in 1914, Canada was a very different country than it is today. During that time, Canada had a population of more than eight million people and most of them were immigrants. Canada wasn\'t really recognized as a separate nation and was thought of as dependent on Britain. Canada had an army of 660,000 men. Most of these men served in France and Flanders. ...read more.

The victory happened quickly and three of the four divisions achieved their goal by capturing r part of the Ridge by noon that day. The final hill was captured two days later. The Canadian front line had been pushed forward four kilometers which is an enormous distance in trench warfare. The Canadians had intensive training and excellent planning and it paid off. They showed the utmost courage while performing the attack. This proved to the world that the Canadians were a dedicated, hardworking, and extremely forceful attack troop. They won the battle on their own and without being lead by a British commander. The Canadians were becoming highly respected and loved throughout Europe. For their courage, four Canadians were awarded with Victoria Crosses which is Canada\'s highest honor for bravery. ...read more.

Canada was a proud, strong, independent nation and the victory at Vimy Ridge greatly contributed to this \"separation\" from Britain. Vimy was chosen as the site for Canada\'s greatest memorial of the First World War. The French government allowed the 250 acres of land on the Ridge to be used by Canada to erect a memorial and a design by a Toronto sculptor was chosen. It was made up two tall pylons symbolizing Canada and France. This was a place to commemorate both the battle and the memory of the 11,285 Canadians who died in France and have no known graves. Vimy was a military victory won with Canadian ingenuity, innovation and courage. Very few Vimy veterans are alive today but the memory of what they achieved will endure forever. It is a symbol of what Canadians can achieve in both war and peace. On this Remembrance day let us remember that achievement. ...read more.