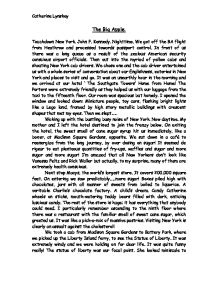 The Big Apple. Touchdown New York. John F. Kennedy. Nighttime. We got off the BA flight from Heathrow and processed towards passport control. In front of us there was a long queue as a result of the zealous American security conscious airport officials. Then out into the myriad of yellow cabs and shouting New York cab drivers. We chose one and the cab driver entertained us with a whole series of conversation about our Englishness, eateries in New York and places to visit and go. It was an unearthly hour in the morning and we arrived at our hotel ' The Southgate Towers' Home from Home! The Porters were extremely friendly as they helped us with our luggage from the taxi to the fifteenth floor. Our room was spacious but homely. I opened the window and looked down: Miniature people, toy cars, flashing bright lights like a Lego land, framed by high story metallic buildings with crescent shapes that met my eyes. Then we slept...... Waking up with the bustling busy noise of New York. ...read more.

It was quite funny really! The statue of liberty was our focal point. She looked miniscule to start with but as we approached her she began to stand proud above us. The land of the free. Earlier we had visited Ground Zero, and reflected on the tragic episode that tainted so many lives. We spent some time looking around the area before we returned to our hotel for a well-earned rest. The next day we decided to see more tourist sites. We managed to fit in the Empire State building, which was a mother of a building with its 449 metres height, 331 tonnes of weight, 10,000 bricks to form it, and its 85 floors. Typically American, typically big. Next we saw the Chrysler building, and Grand Central Station. Then on to Times Square, which was like a kaleidoscope of colour, Blackpool illuminations transported to the east coast. Finally we had a good look around Grand Central Station. ...read more.

For example the alcohol laws are far stricter for young adults, as they cannot purchase drink until they are twenty-one; paradoxically this means that a small minority of young New Yorkers are getting involved in harder drugs at a younger age than this country. For this reason I sometimes, felt slightly on edge while walking down the symmetrical streets at night with my mother after a long day's shopping. However I generally felt safer in New York than in London, even with the legal usages of guns, possessed by so many. This is an irony, as most people consider New York as being a violent city, as guns are legalised; many television programmes and films back this view. In my opinion London streets are far more dangerous than New Yorks, and in my understanding statistics back this up. In essence, New Yorkers made me feel so welcome; although I was eight hours away from home. The experience was so enjoyable that I would love to see more of America. The people are so friendly and willing to help. By contrast Londoners are more reserved and standoffish. Catherine Lynskey ...read more.