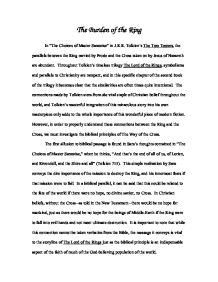 The Burden of the Ring In &quot;The Choices of Master Samwise&quot; in J.R.R. Tolkien's The Two Towers, the parallels between the Ring carried by Frodo and the Cross taken on by Jesus of Nazareth are abundant.

The Burden of the Ring In "The Choices of Master Samwise" in J.R.R. Tolkien's The Two Towers, the parallels between the Ring carried by Frodo and the Cross taken on by Jesus of Nazareth are abundant. Throughout Tolkien's timeless trilogy The Lord of the Rings, symbolisms and parallels to Christianity are rampant, and in this specific chapter of the second book of the trilogy it becomes clear that the similarities are often times quite intentional. The connections made by Tolkien stem from the vital staple of Christian belief throughout the world, and Tolkien's masterful integration of this miraculous story into his own masterpiece only adds to the whole importance of this wonderful piece of modern fiction. However, in order to properly understand these connections between the Ring and the Cross, we must investigate the biblical principles of The Way of the Cross. The first allusion to biblical passage is found in Sam's thoughts contained in "The Choices of Master Samwise," when he thinks, "And that's the end of all of us, of Lorien, and Rivendell, and the Shire and all" (Tolkien 715). This simple realization by Sam conveys the dire importance of the mission to destroy the Ring, and his innermost fears if that mission were to fail. ...read more.

Biblical text tells us that after the trial presided by Pontius Pilate, Jesus was called to be executed by crucifixion, and it is in this that we come to the heart of The Way of the Cross. In my readings of The Two Towers, I found two passages that I felt strongly conveyed the burden Jesus faced carrying the splintered wooden Cross, as well as the burden that Simon of Cyrene took upon his own shoulders when Jesus was too weak and fell on the path to Calvary. The following fragment of Tolkien's work reveals the thoughts of Simon of Cyrene with uncanny accuracy. Again using Sam Gamgee as the medium, the passage states: "How could he escape, or save himself, or save the Ring? The Ring. He was not aware of any thought or decision. He simply found himself drawing out the chain and taking the Ring in his hand. The head of the orc-company appeared in the Cleft right before him. Then he put it on" (Tolkien 717). Without question, this was much the same situation that Simon the Cyrene faced when pulled from the crowd to take up the Cross of Jesus, with the only discrepancy being that Simon was pulled by the Roman soldiers (Orcs perhaps?) ...read more.

Mary Magdalene experienced this shocking miracle when she visited the tomb of Jesus after his burials described in Matthew 28:6: "He is not here, for He is risen, as He said. Come, see the place where the Lord lay." Though I am certainly not suggesting Frodo is a "Lord" of any sort, he will prove to be a savior as the storyline progresses, and that is the importance of this passage. In conclusion, Frodo's momentary inability to carry the Ring and thus the passing of the Ring to Sam Gamgee is, in my opinion, the most prevalent and important theme of The Two Towers. The biblical allusions are everywhere in the text of The Two Towers, and this is quite a reflection of J.R.R. Tolkien's personal convictions and beliefs. What hangs in the mind of the reader, conscious of Christianity or not, are themes that join the human race nearly everywhere. The sacrifice of self unto death. The demand that the world be saved by carrying this Ring. All of that is at the heart of the matter in "The Choices of Master Samwise," and we cannot even begin to imagine that Tolkien would have had the Ring, without the Cross that came long before. ...read more.