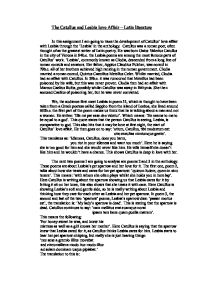 The Catullus and Lesbia love Affair - Latin literature In this assignment I am going to trace the development of Catullus' love affair with Lesbia through the 'Lesbia' in the anthology. Catullus was a roman poet, often thought of as the greatest writer of Latin poetry. He was born Gaius Valerius Catullus in the city of Verona in 84b.c. the Lesbia poems are among the most famous parts of Catullus' work. 'Lesbia', commonly known as Clodia, descended from a long line of roman consuls and senators. Her father, Appius Claudius Pulcher, was consul in 79b.c. all of her brothers achieved high ranking in the roman government. Clodia married a roman consul, Quintus Caecilius Metellus Celer. Whilst married, Clodia had an affair with Catullus. In 59b.c. it was rumoured that Metellus had been poisoned by his wife, but this was never proven. Clodia then had an affair with Marcus Caelius Rufus, possibly whilst Catullus was away in Bithynia. She then accused Caelius of poisoning her, but he was never convicted. We, the audience first meet Lesbia in poem 51, which is thought to have been taken from a Greek poetess called Sappho from the island of Lesbos, she lived around 630b.c. ...read more.

This is stating that the sparrow is dead. Catullus continues to say: 'nam mellitus erat suamque norat ipsam tam bene quam puella matrem'. This means the following: 'For honey-sweet he was, and knew his mistress as well as a girl knows her mother'. Here Catullus is saying that the sparrow knew that Lesbia cared for it, as Catullus thinks Lesbia cares for him. Lesbia starts to hear her pet sparrow chirping, but really she is just hearing things: 'nec sese a gremio illius movebat sed circumsiliens modo huc modo illuc ad solam dominam usque pipiabat.' The translation to this is: 'nor would he stir from her lap, but hoping now here, now there, would still chirp to his mistress alone.' The beginning of the translation says she would have her pet sparrow on her lap, still petting it as if it was alive. Catullus feels the same way about Lesbia, if anything happened to her. The next set of poems I am going to study, are poems comparing Lesbia to other women: 'nec bello pede nec nigris ocellis nec longis digitis nec ore sicco nec sane nimis elegante lingua'. ...read more.

here he describes how he tells Lesbia that he doesn't want to have anything to do with her. He tells the two people he trusts the least to give her a message; to tell her never go near him again: 'cum suis uiuat ualeatque moechis Qous simul complexta tenet trecentos'. this translates to: 'let her live and be happy with her paramours, three hundred of whom she holds at once in her embrace'. Catullus is saying here that Lesbia has been with hundreds of men, which is considered to be common. She may have sold herself for sex at one point. I think Catullus is also trying to get across that Lesbia is a women of few morals and has little respect for herself and her body. In conclusion to all this evidence and analysis, I think Catullus was just another man in Lesbia's life. I think she felt a little love for him and just used him for his love and devotion towards her. She used his money and kindness against him Catullus loved her dearly and wanted to marry her but never admitted to the marriage thought. These are all my personal opinions of the Catullus and Lesbia love affair, and I think it was just an affair. ...read more.