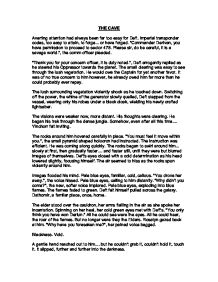 THE CAVE Averting attention had always been far too easy for Deft. Imperial transponder codes, too easy to attain, to forge... or have forged. "Commander Derivan, you have permission to proceed to sector 478. Please sir, do be careful, it is a savage world.", the comm officer pleaded. "Thank you for your concern officer, it is duly noted.", Deft arrogantly replied as he steered his Oppressor towards the planet. The small clearing was easy to see through the lush vegetation. He would owe the Captain for yet another favor. It was of no true concern to him however, he already owed him far more than he could probably ever repay. The lush surrounding vegetation violently shook as he touched down. Switching off the power, the whine of the generator slowly quelled, Deft stepped from the vessel, wearing only his robes under a black cloak, wielding his newly crafted lightsaber. The visions were weaker now, more distant. His thoughts were clearing. He began his trek through the dense jungle. Somehow, even after all this time.... Yinchorr felt inviting. The rocks around him hovered carefully in place. "You must feel it move within you.", the small pyramid shaped holocron had instructed. The instruction was efficient. He was coming along quickly. The rocks began to swirl around him... slowly at first, then gradually faster.... and faster still, until they were but blurred images of themselves. Deft's eyes closed with a cold determination as his head lowered slightly, focusing himself. The air seemed to hiss as the rocks spun violently around him. Images flooded his mind. Pale blue eyes, familiar, cold, callous. "You drove her away.", the voice hissed. Pale blue eyes, calling to him distantly. "Why didn't you come?", the new, softer voice implored. Pale blue eyes, exploding into blue flames. The flames faded to green. Deft felt himself pulled across the galaxy. Dathomir, a famliar place, once, home. The elder stood over the cauldron, her arms flailing in the air as she spoke her incantation. ...read more.

Her inviting red hair still bore the subtle trace of a helmet. Deft could not help but wonder, was he able to speak with them now.... because they were all dead? He dropped to his knees, sobbing, the situation too much for even him, to handle. The incessant yelling stopped, all was quiet. Deft took control of himself once again, regaining his composure. Slowly, he raised his head to see the horrid depiction. All four of them.... lie dead before him. Their bodies broken, twisted lumps of flesh that once held a vibrance for life he fed off of. Now, empty vessels. The Emperor once again stepped forward. "What manner of treachery is this?", Deft implored, "They cannot be dead." "There is no treachery here, only truths within yourself.", the Emperor explained, "What you see, is a mirror of what lies deep within you." Deft knelt before the four corpses, and then, they came. From the shadows they stepped, each armed differently, each, having a different reason for being there. Those reasons, were the women lying before him. Percy, the insecure boy, placed a gentle hand on Yvaine's head, brushing her flowing blonde braids away from her green eyes. Then, turning his angry, jealous gaze to Deft, he unsheathed his blade. Noldat stood over Lelu Orion, his eyes never waivering from Deft's, this had been a long time coming. His pistol unholstered, and prepared to slay his sworn enemy. Wraidth shed a gentle tear as he touched Nydari's soft blue lekku one last time, unsheathing his sword, he snarled at him. "I would have cared for her as you never could." Finally, Boden. Deft stood mildly perplexed at the sight, as Boden's eyes filled with rage and tears stared callously at him over Rosalyn's torn body. No words were spoken, but Deft did not need to hear them, he knew why Boden was there. ...read more.

"I see.", Deft turned to face the Emperor again, "I came here, I thought, to find answers." "My boy, I am not here to give you the answers you seek.", he coldly stared at him, "I think you already have those answers within yourself." Deft had so many questions to still be answered, "And how is it you are here?. The Emperor smirked at him, "I am not here." With that, the Emperor vanished, and Deft found himself standing again in the entryway of the cave. It was not long after that Deft found himself sitting at the foot of his Oppressor contemplating his existence. What was all of this for? What lessons were to be learned? Why was he doing all of this? For the Emperor? For himself? Where had it gotten him? The Emperor had always promised him, one day he would understand, but perhaps, even the Emperor, could not foresee what was to come. *beep beep* His subspace com erupted with authority. Deft could sense it. "Yes my Lord?", he said, knowing exactly who it was. "I sense you have done well Lord Aklin.", the cold feeling of triumph was apparent, "Now.... you understand." "Yes..... I do.", he replied, his tone uncaring, indifferent. A short hesitation hung in the air before he proceeded, cutting the Emperor off as he begun to speak, "I understand that I have grown tired of your meddling old man. And perhaps.... a change is indeed needed." The Emperor's sudden rage could be heard as Deft simply deactivated his com and boarded his ship. Activating the radio aboard The Subterfuge, he quickly contacted Tovina, "My dear, I think we need to have a little discussion." Deft knew now what he sought, and being subservient to Palpatine was no longer fitting for him... he was better than that... stronger. The time had come for Deft to take what was his.... by force. For the Emperor had indeed twisted him to the Dark Side as intended, though, perhaps he twisted a bit too hard. Perhaps.... now it was Deft's turn, to twist back. ...read more.