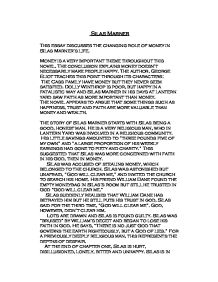 The changing role of money in Silas Marner&amp;#146;s life

Silas Marner This essay discusses the changing role of money in Silas Marner's life. Money is a very important theme throughout this novel. The conclusion explains money doesn't necessarily make people happy. The author, George Eliot teaches this point through its characters: The Cass family have money but they never seem satisfied. Dolly Winthrop is poor, but happy in a fatalistic way and Silas Marner in his days at lantern yard saw faith as more important than money. The novel appears to argue that some things such as happiness, trust and faith are more valuable than money and wealth. The story of Silas Marner starts with Silas being a good, honest man. He is a very religious man, who in Lantern Yard was involved in a religious community. His little savings amounted to "three pounds five of my own" and "a large proportion of his weekly earnings had gone to piety and charity." This suggested that Silas was more concerned with faith in his God, then in money. Silas was accused of stealing money, which belonged to the church. Silas was astonished but unafraid, "God will clear me," and invited the church to search his home. ...read more.

To his horror he found that it is missing. He is filled with terror but couldn't believe the gold had really gone. He spent hours searching and hoping that it might turn up. It doesn't! When he finally accepted that it had gone, he let out, "a wild, ringing scream, the cry of desolation." He, "totters" towards his loom almost insane. He is so devastated he can hardly walk. His purpose in life has been destroyed. This loss is described as, "the withering desolation of a bereavement." Silas decided it is a thief and suspected Jem Rodney. Silas choose to walk to the village. He went to the Rainbow to notify the villages of robbery and depended on the Squire and others to help him recover his money. The villagers are surprised by the appearance of Silas who entered the pub stating his loss. Jem Rodney denied the charged and Silas apologised, as he knew about being wrongly accused. The men are helpful and suggested that there must be some clues to track down the thief. Mr Dowlas and Mr Snell went out into the dark to help Silas. ...read more.

He told Eppie that when she first came to him he still longed for his gold but, "after a bit, I should have thought it was a curse come again, if it had drove you from me." Eppie was a greater treasure to him than his gold had ever been. When it returned he said, "Takes no hold of me now." Godfrey and Nancy asked Eppie to return, "home" to live with them. When Eppie refused Godfrey confessed that he is her father and has a claim on her. Silas was ready to fight for what he loved. The argument showed Godfrey to be selfish and unfeeling to the lower classes. Eppie is adamant to stay with Silas, the only father she has known. Godfrey and Nancy were distraught, but they can do nothing. (In a way Godfrey is "punished" years after his "crime") This suggested that Godfrey and Nancy are left alone and unfulfilled, where as Silas has all he wanted. Godfrey tried to make things up to Eppie. He decided to leave her, his wealth in his will. The novel ended with Silas and Eppie setting off to Lantern Yard to see the old home, it no longer existed and he realised Raveloe is his only home. CHRISTINA GANDHI ...read more.