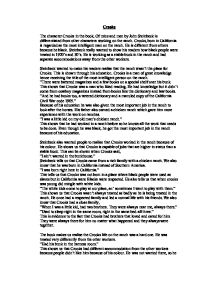 The character Crooks in the book, Of mice and men by John Steinbeck is differentiated from other characters working on the ranch.

Crooks The character Crooks in the book, Of mice and men by John Steinbeck is differentiated from other characters working on the ranch. Crooks, born in California is regarded as the most intelligent man on the ranch. He is different from others because he black. Steinbeck really wanted to show his readers how black people were treated in 1920's and 30's. He is working as a stable buck in the ranch and had separate accommodations away from the other workers. Steinbeck wanted to make his readers realise that the ranch wasn't the place for Crooks. This is shown through his education. Crooks is a man of great knowledge hence receiving the title of the most intelligent person on the ranch. "There were battered magazines and a few books on a special shelf over his bunk. This shows that Crooks was a man who liked reading. He had knowledge but it didn't come from cowboy magazines instead from books like the dictionary and law books. "And he had books too, a tattered dictionary and a manuled copy of the California Civil War code 1905." Because of his education he was also given the most important job in the ranch to look after the horses. His father also owned a chicken ranch which gave him more experience with the work on ranches. ...read more.

"They play cards there, but I can't play because I'm black." This shows that all the people in the ranch regarded Crooks as an outcast. They didn't want him to be part of their group. He was alone in whatever he did and people made fun of him. "They say I stink" People tortured him and made him feel like he isn't wanted there. Because he had been distanced from the people he is all alone by himself. He is lonely and friendless. "Crooks was a proud, aloof man. He kept his distance and demanded that other people keep there's." He was so used to being alone that he wanted everyone to keep his distance from him. His loneliness went so far that whenever someone wanted to be close to him he became angry towards them. This is what happened to Lennie. When he tried to approach him Crooks was very defensive as if he didn't trust Lennie. "But on raising his eyes he stiffened and a scowl came to his face." This shows us that Crooks didn't trust Lennie even though he didn't mean any harm was because he wasn't used to people approaching him. He thought that Lennie was going to make fun of him as the others did. "You got no right to come in my room. ...read more.

I also think that it's quite sad that he had to tell all his sorrows to someone who doesn't even understand it. He himself surrenders for a fact that a person goes mad without a companion. "I guy goes nut if he ain't got nobody." This shows us that he was miserable and alone maybe Steinbeck wanted his readers to show sympathy towards him. But I think he went a step too far when he told Lennie that George had gone. "S'pose he took a powder and just ain't coming back." Even though I understand why he tortured Lennie but I still think that it wasn't the right thing to do because Lennie doesn't understand the pain and problems he is going through and so shouldn't have been made miserable. I also think that Crooks is a man of great intelligence and knowledge which is shown when Steinbeck mentions about his collections of books. The character Crooks in this book is a person that Steinbeck wanted his readers to have sympathy for. He wanted them to realise how black people were being treated during that time. Steinbeck uses Crooks background to really give the readers a clear picture of what actually happened to him and many others. I think Steinbeck's idea of making Crooks disable would earn more sympathy from his readers. He really shows how different Crooks is by his unique character. His work status and education also makes him different from the other workers on the ranch. By Nidhia Babu ...read more.