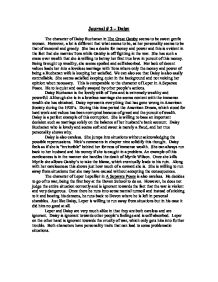 The character of Daisy Buchanan in The Great Gatsby seems to be sweet gentle women.

Journal # 2 - Daisy The character of Daisy Buchanan in The Great Gatsby seems to be sweet gentle women. However, a lot is different that what seems to be, as her personality seems to be that of immoral and greedy. She has a desire for money and power and this is evident in the fact that she marries Tom while Gatsby is off fighting in the war. She has such a craze over wealth that she is willing to betray her first true love in pursuit of this money. Being brought up wealthy, she seems spoiled and self absorbed. Her lack of decent values leads her into a loveless marriage with Tom where only the money and power of being a Buchanan wife is keeping her satisfied. ...read more.

Daisy represents everything that has gone wrong in American Society during the 1920's. During this time period the American Dream, which stood for hard work and values has been corrupted because of greed and the pursuit of wealth. Daisy is a perfect example of this corruption. She is willing to base an important decision such as marriage solely on the balance of her husband's bank account. Daisy Buchanan who is lovely and seems soft and sweet is merely a fraud, and her true personality shows why. Daisy is also careless. She jumps into situations without acknowledging the possible repercussions. Nick's comments in chapter nine solidify this thought. Daisy feels as if she is "invincible" behind her fortress of immense wealth. ...read more.

He decides to go of to war, being the first boy at the Devon School to do so. However, he does not judge the entire situation correctly and is ignorant towards the fact that the war is violent and very dangerous. Once there he runs into some mental turmoil and instead of sticking to it and beating his demons, he runs back to Devon where he is left in personal shambles. Just like Daisy, Leper is willing to run away from situations but in his case it did him no good at all. Leper and Daisy are very much alike in that they are both careless and are ignorant. Daisy is ignorant towards other people's feelings and is self-absorbed. Leper on the other hand is ignorant towards the cruelty of war, which only gets him into further trouble. Both characters have personality traits that can lead to some problematic situations. Words: 562 ...read more.