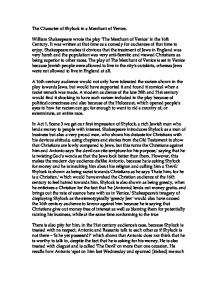 The Character of Shylock in a Merchant of Venice.

The Character of Shylock in a Merchant of Venice. William Shakespeare wrote the play 'The Merchant of Venice' in the 16th Century. It was written at that time as a comedy for audiences of that time to enjoy. Shakespeare makes it obvious that the treatment of Jews in England was very harsh and the population was very anti-Semitic and viewed Christians as being superior to other races. The play of The Merchant of Venice is set in Venice because Jewish people were allowed to live in the city's outskirts, whereas Jews were not allowed to live in England at all. A 16th century audience would not only have tolerated the racism shown in the play towards Jews, but would have supported it and found it comical when a racist remark was made. A modern audience of the late 20th and 21st century would find it shocking to have such racism included in the play because of political correctness and also because of the Holocaust, which opened people's eyes to how far racism can go; far enough to want to rid a country of, or exterminate, an entire race. In Act 1, Scene 3 we get our first impression of Shylock, a rich Jewish man who lends money to people with interest. Shakespeare introduces Shylock as a man of business but also a very proud man, who shows his distaste for Christians with his devious attitude, using chapters and stories from the Old Testament to show that Christians are lowly compared to Jews, but this turns the Christians against him and Antonio says 'the devil can cite scripture for his purpose,' saying that he is twisting God's words so that the Jews look better than them. However, this makes the modern day audience dislike Antonio, because he is asking Shylock for money and he is insulting him about his religion and calling him a 'Devil.' ...read more.

In Act 3, Scene 1, Salanio and Salarino bait Shylock by talking to him about the loss of his daughter. Shylock, who is angry and bitter, says 'She [Jessica] is damned for it,' but Salanio angers him by saying 'that's certain, if the Devil may be her judge,' so he is saying that if Jessica is going to be damned, it is the Devil who has damned her and not God, which is subtly racist against Jews. However, Shylock lets out his anger at Salanio and Salarino, because they are Christians and support Antonio, who helped Jessica and Launcelot elope. Salanio and Salarino try to dissuade Shylock from taking his bond of Antonio's flesh because Antonio is now poor, due to his ship being wrecked. However, Shylock talks about how much Antonio has done against him and how the Christian's shouldn't prejudice against the Jews because they are all human beings. Shylock says 'If you prick us, do we not bleed? If you tickle us, do we not laugh? If you poison us, do we not die? And if you wrong us, shall we not revenge?' which is both valid and emotional. It would make the 16th century audience feel angry because he is comparing Jews to Christians, and saying that they are both equal. On the other hand, the 21st century audience would feel that Shylock is standing up for both himself and his nation, trying to make the Christians cease their racist abuse, because they are all equal. In Act 4, Scene 1 Shylock is in a courtroom, arguing his case to get his part of the bond [the pound of flesh] from Antonio, because he did not pay back the money that he borrowed. The duke, who is Christian and also the Judge, shows immediately that he is on Antonio's side. He says that Shylock is 'an inhuman wretch, uncapable of pity, void and empty from any dram of mercy,' which shows that even the court is biased. ...read more.

Taking his life would be an act of mercy, from the 21st century point of view, because he has had everything, including his religion taken away from him. Shakespeare would not have allowed Shylock to win because he would have been aiming his plays at a Christian audience, who would have been anti-Semitic and this would have been the way that the Christian audience in the 16th century would have wanted it to end. It is a good message to show that revenge is not a good way to create equality and social harmony, because it just forces the wedge between the battling sides, in this case Christians and Jews. The character of Shylock evoked different emotions and changes of views in both audiences of the 16th century and in the modern day/21st century. It caused the 21st century audience to feel sorry for the Jews and to give them an insight into how badly they were treated and how the attitudes have changed towards Jewish people dramatically over time. It shows that Shakespeare was a racist person and that although he wrote plays about people from other religions, he saw Christianity as being above all other religions, though he may not be completely racist because he writes the emotional speech which compares the Jews to Christians in the speech about 'hath not a Jew eyes, hath not a Jew hands, organs, dimensions, senses, affections, passions?,' which is a very anti-racist speech. Maybe Shakespeare just came across racist because he had to write plays that would interest the audience and be relevant to their viewpoints, so that would have played a big factor in the good defeating evil plots in most of his plays. Shakespeare may not have been brave enough to be really controversial and talk about how Jews were good and equal to Christians, because it would have made him unfavourable towards the 16th century audience. Merchant of Venice, in my opinion, showed that the opinions of people about religion have changed a lot over time, maybe due to the historical actions that have occurred and have changed people's attitudes. ...read more.