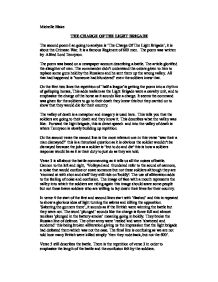 'The Charge Of The Light Brigade' - analysis

Michelle Blake THE CHARGE OF THE LIGHT BRIGADE The second poem I an going to analyse is 'The Charge Of The Light Brigade', it is about the Crimean War. It is a famous Regiment of 600 men. The poem was written by Alfred Lord Tennyson. The poem was based on a newspaper account describing a battle. The article glorified the slaughter of men. The commander didn't understand the orders given to him to replace some guns held by the Russians and he sent them up the wrong valley. All that had happened is "someone had blundered" even the soldiers knew that. On the first two lines the repetition of 'half a league'is getting the poem into a rhythm of galloping horses, This adds realism as the Light Brigade were a cavalry unit, and to emphasise the charge of the horse as it sounds like a charge. ...read more.

Verse 3 is all about the battle commencing as it tells us all the noises of battle. Cannon to the left and right, 'Volleyed and thundered refer to the sound of cannons, a noise that would confuse or scare someone but not these soldiers although they are 'stormed at with shot and shell'they still ride on 'boldly'. The use of alliteration adds to the feeling of noise and confusion. The image of face with a mouth represents the valley into which the soldiers are riding again this image should scare some people but not these brave soldiers who are willing to lay down their lives for their country. In verse 4 the start of the first and second lines start with 'flashed' and this is repeated to show a glorious idea of light turning the sabres and killing the opposition. ...read more.

The last verse begins with another rhetorical question. The fact that 'their glory cannot fade' because of the brave act they committed, people should never forget this sacrifice. He repeats that we should 'honour' the Light Brigade. We should honour the men because they died needlessly as they knew that they were being sent to their deaths but carried on fighting for their country. I felt this to be a much better poem compared to Anthem For Doomed Youth. In this poem Tennyson seems to show the war as a glorious thing. I do not feel that any war can be glorified in any way. This poem seems to show the British Army was a laughing stock and that someones stupidity had caused all these needless deaths. Tennyson seems to portray the courage of the men which is positive and he seems to want us to be proud of what the saoldiers did albeit a mistake. ...read more.