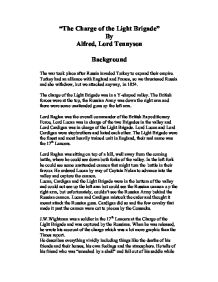 &quot;The Charge of the Light Brigade&quot; By Alfred, Lord Tennyson

He describes everything vividly including things like the deaths of his friends and their horses, his own feelings and the atmosphere. He tells of his friend who was "smashed by a shell" and fell out of his saddle while his horse carried on, "treading on and tearing out her entrails" until she "dropped with a strange shriek". He also writes about Sergeant Talbot who gets decapitated by a shell, whilst his "headless body kept the saddle, with the lance at the charge still firmly gripped". He describes the atmosphere of the charge by telling us of "the crash of the shells and the whistle of bullets, the cheers and the dying cries of comrades." He also writes about the injuries to himself and his horse and of "local colour." I think that his account is more detailed and truthful than the Times report but probably wouldn't have been published because of the goryness. ...read more.

If the true horrors were widely known, support for the war would wain and awkard questions may be asked of the governments reasons for sending men to their slaughter. War is always Glorified by the media, who write only of Pride and Splendour and the fearlessness of ourbrave men, not of the fact that young men were led by bungling Lords and sent to their bloody deaths. On the other hand, if the truth of the war was reported,as in the words of Wightman, then perhaps things may have been thought out and plans made to ensure Victory without needless loss of life. The Lords may have had to work a plan of war instead of trying to win a war on the strengths of their own self glorification and vanity,and of course it would not do for the public to know the armys tactics,ie, the men as cannon fodder and the Lords watching from a safe hilltop, from whence one cannot see the blood and gore, only the Local Colour !!. The comparison to be made is simple, Truth=wightman.....Lies=the Times. ...read more.