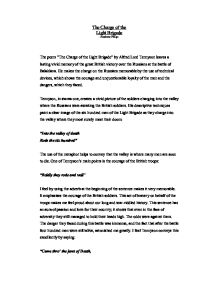 The Charge of the Light Brigade.

The Charge of the Light Brigade -Andrew Philp- The poem "The Charge of the Light Brigade" by Alfred Lord Tennyson leaves a lasting vivid memory of the great British victory over the Russians at the battle of Balaklava. He makes the charge on the Russians memorable by the use of technical devices, which shows the courage and unquestionable loyalty of the men and the dangers, which they faced. Tennyson, in stanza one, creates a vivid picture of the soldiers charging into the valley where the Russians were awaiting the British soldiers. His descriptive techniques paint a clear image of the six hundred men of the Light Brigade as they charge into the valley where they most surely meet their doom: "Into the valley of death Rode the six hundred" The use of the metaphor helps to convey that the valley is where many men are soon to die. ...read more.

I feel Tennyson conveys this excellently by saying: "Came thro' the jaws of Death, Back from the mouth of hell, All that was left of them, Left of six hundred." This adds to their already heroic status by showing they have a great will to survive and to win this battle. The use of the personification "jaws of death" creates a vivid picture of the soldiers persevering through horrendous times to be triumphant and escape with their lives. The second personification in the next line "mouth of hell" emphasises the great struggle they faced to become victors. Both these personifications create an image of the valley mouth attempting to devour the victorious soldiers but they only narrowly escaped dying and entering hell. ...read more.

You can hear the thunderous crack of the rifles as they are being fired at the advancing soldiers. You can create a mental picture of the maelstrom of the raging battle. This alliteration brings the whole poem to life. Others may argue that "The Charge of the Light Brigade" was nothing more than a misguided action, which led to the unnecessary death of more than two hundred men. Had the orders been accurately conveyed the loss of life would have been greatly reduced. This poem glorifies war which I think is misleading and war should not be depicted like this. However the use of the technical devices stirs the soul and makes it a very memorable and vivid poem that tells the story of great heroics to complete this deadly mission and to come out alive. ...read more.