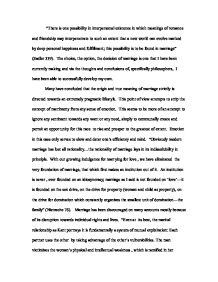 The choice, the option, the decision of marriage is one that I have been currently making and via the thoughts and conclusions of, specifically philosophers, I have been able to successfully develop my own.

"There is one possibility in interpersonal existence in which meanings of romance and friendship may interpenetrate to such an extent that a new world can evolve marked by deep personal happiness and fulfillment; this possibility is to be found in marriage" (Sadler 339). The choice, the option, the decision of marriage is one that I have been currently making and via the thoughts and conclusions of, specifically philosophers, I have been able to successfully develop my own. Many have concluded that the origin and true meaning of marriage strictly is directed towards an extremely pragmatic lifestyle. This point of view attempts to strip the concept of matrimony from any sense of emotion. This seems to be more of an attempt to ignore any sentiment towards any want or any need, simply to communally create and permit an opportunity for this race to rise and prosper to the greatest of extent. Emotion in this case only serves to slow and deter one's efficiency and mind. "Obviously modern marriage has lost all rationality...the rationality of marriage lays in its indissolubility in principle. With our growing indulgence for marrying for love , we have eliminated the very foundation of marriage, that which first makes an institution out of it. An institution is never , ever founded on an idiosyncrasy; marriage as I said is not founded on 'love'-it is founded on the sex drive, on the drive for property (woman and child as property), on the drive for domination which constantly organizes the smallest unit of domination-the family" (Nietzsche 76). Marriage has been discouraged on many accounts mostly because of its disruption towards individual rights and lives. ...read more.

He even speaks, without a trace of irony, of Regine as having helped him with his relation to God and, in this way, to become 'myself'. Marriage was a good thing but had to be sacrificed"( qtd. In Hannay 167) Kierkegaard himself attributes the beginning of the second part [of Either / Or] to marriage; he claims the reason it begins with that concept is because it 'is the most profound form of revelation of life'. This man also has a distinct point of view when it comes to the roles both men and women play in their marriage or in their non-marriage. "Women are not bound to men in the nature of understanding itself but also by the nature of relationships they find themselves in with men. Women are oppressed by men, but they are also married to them, taught by them, guided by them, parented by them, bound to them by a hundred small commitments" (Lyn 169)" The destruction of marriage is unlikely as long as the one who reflects on marriage is male, even when that male is H.H. The institution remains rooted and secure, and questioning remains in the domain of exploration of alternative ways of choosing to marry or not to marry. But, H.H. never considers how it might change the discussion for a woman to reflect deeply upon marriage. A woman's being in a patriarchal culture is subsumed under her relationship to marriage. Whereas a man might wonder whether to marry or not to marry, a woman is married or unmarried, miss or mistress. To attempt to understand what it means to be a woman requires genius, because she has no meaning in the existing order except as a subset and attachment to Man. ...read more.

Romantic lovers inhabit their own world, and although this does not need to entail the suppression of separate interests or to involve doing everything together, their individual identity is to a great extent superseded by the formation of this "we self". According to the romantic model, only the latter brings fulfillment and completion to the individual life. Similar to this, in marriage two people present a united front to the world"(White 64) The relationship involves differences as much as it involves a commitment. Arguments and sacrifices don't fit quite inside the meaning of the terms. In other words, an argument or a sacrifice doesn't truly seem like an argument or sacrifice at all because they are simply small products of something much bigger-a love worth anything. This type of love is important because it creates the "sacred character of the world" and "transfigures our own experience"(White 76). Passionate love truly offers the most intense, the most powerful possibilities of self-transformation. "Since it changes the physical, the emotional, and spiritual aspects of individual life"(White 76) . Only after truly experiencing the nature and life of a passionate and unconditional love can I agree with the few sentences above. Only after truly feeling what it is like to live with such a love can I make the decision as to whether I should commit to this arrangement for life. The statement: "you just know", in that sense is certainly not a cop out. These philosophers, in particular, did not necessarily aid in the search for the right person or the right decision in following what I solely believed was true and right, they only allowed me to view the difference of thought from one mind to another-from one continent to another. They simply reinforced what I felt to be true and realistic. ...read more.