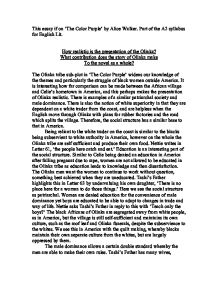 'The Color Purple' - How realistic is the presentation of the Olinka? What contribution does the story of Olinka make to the novel as a whole?

This essay if on 'The Color Purple' by Alice Walker. Part of the A2 syllabus for English Lit. How realistic is the presentation of the Olinka? What contribution does the story of Olinka make To the novel as a whole? The Olinka tribe sub-plot in 'The Color Purple' widens our knowledge of the themes and particularly the struggle of black women outside America. It is interesting how far comparison can be made between the African village and Celie's hometown in America, and this perhaps makes the presentation of Olinka realistic. There is examples of a similar patriarchal society and male dominance. There is also the notion of white superiority in that they are dependent on a white trader from the coast, and are helpless when the English move through Olinka with plans for rubber factories and the road which splits the village. Therefore, the social structure has a similar base to that in America. Being reliant to the white trader on the coast is similar to the blacks being subservient to white authority in America, however on the whole the Olinka tribe are self sufficient and produce their own food. Nettie writes in Letter 61, 'the people here catch and eat.' ...read more.

The complete disregard for the rights of the people seems a fitting microcosm for the bigger picture and white people's attitude towards black people. However Nettie perhaps presents this realistically in that the Olinka men had sold its own people to slavery. As a microcosm of the wider picture this almost shows that certain black people contributed to their own downfall during slavery and this presents a more balanced view. This could be the opinion of Nettie, as in Letter 57 as she writes, 'sold in to slavery their strongest folks' and asks 'Why did they sell us?'. Perhaps Alice Walker is using Nettie here as a way of balancing the argument and educating the reader in order to advance the themes in the novel. The women in the Olinka tribe are praised for hard work and keeping neat production fields, such as in Letter 64 where Nettie writes 'her fields are praised for their cleanliness, productivity and general attractiveness.' This is a realistic presentation as it highlights women's significance at the time. It also brings comparison to America and Kate's praise of Celie in Letter 12, 'You keep a clean house.' Whilst this shows praise for women, it really only highlights them as housewives and gives them little significance in society. ...read more.

Perhaps Alice Walker also uses Nettie in the sub-plot to bring in her own interpretations of the suffering and slavery of black people of the time. The Olinka sub-plot contributes importantly to the novel simply as a microcosm for the bigger picture. Through the events in Olinka, Alice Walker can globalize the themes, and widen our understanding. A major theme of the Olinka sub-plot is ignorance to understanding. The reader, as well as Nettie, begin to understand the wider picture of all themes presented in 'The Color Purple'. We can relate this to Celie's life in America and the oppression suffered by Sofia under the white police, and also the physical and mental oppression of Celie by Mr___ and Fonso. In conclusion the Olinka sub-plot is essential in increasing our understanding, as well as allowing the novel to develop. It also presents Alice Walker with the chance to use plot devices such as the death of Corrine and Nettie's sighting of Sofia in Letter 55, which speed up the progress of the novel and its storyline. The people and structure of the Olinka tribe is presented realistically in a time of struggle for the black community and women. It is also presented realistically considering the move from peaceful African tribal villages, to discontent caused by European imperealism which happened at the time. ...read more.