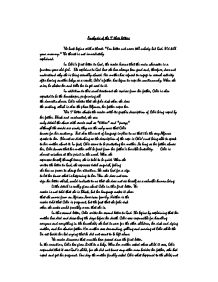 The colour purple - Analysis of the 1st three letters.

Analysis of the 1st three letters The book begins with a threat: "You better not never tell nobody but God. It'd kill your mammy." The threat is not immediately explained. In Celie's first letter to God, the reader learns that the main character is a fourteen-year-old girl. She explains to God how she has always been good and, therefore, does not understand why she is being sexually abused. Her mother has refused to engage in sexual activity after having another baby; as a result, Celie's father has begun to rape her continuously. When she cries, he chokes her and tells her to get used to it. In addition to this cruel treatment she receives from her father, Celie is also expected to be the housekeeper, performing all the domestic chores. Celie relates that she feels sick when she does the cooking, which is also the place Alfonso, her father rapes her. This 1st letter shocks the reader with its graphic description of Celie being raped by her father. ...read more.

Her mother was demanding, yelling and cursing at Celie while the Pa sat beside her bed crying that he did not want to be left alone. The reader discovers that months have passed since the first letter. In the meantime, Celie has given birth to a baby. When her mother asked whose child it was, Celie responded that it was God's child, for she did not know any other man besides her father, who had raped and got her pregnant. One day the mother finally asked Celie what happened to the child; not fully knowing the answer herself, Celie tells her mother that God took the baby and killed it in the woods while she was sleeping. She then tells her mother that she is pregnant again and that God will probably take this second child and kill it as well. This second letter emphasizes the sense of Celie's own powerlessness, as well as her mother's powerlessness to help her. On her deathbed, Celie's mother makes a weak attempt to find out who is responsible for Celie's pregnancy. ...read more.

Celie has just delivered her second child, a boy. Pa immediately stole the baby and sold him. As the milk runs down Celie, Pa displays disgust towards her about the milk and tells her to dress more decently; unfortunately, the girl has nothing else to wear. She tells God that she hopes Pa will soon find a woman to marry him, for he is beginning to show interest in Nettie, her little sister. She has promised Nettie that she will protect her. It is obvious that Celie has no control over her life or her body. Raped repeatedly by her father, she feels helpless to break the cycle. Her lack of control over her fate is also intensely shown through her swollen breasts. The emotional pain of her child being stolen from her could symbolically be echoed in her painful breasts. She is made to feel even more miserable when Pa screams at her about her disgusting appearance. Celie's promise to protect Nettie from Pa's abuse is the first sign of her taking a stance to prevent the horrors, which are occurring in her patriarchal existence. Although she totally devalues herself, Celie cherishes her sister very much. Her selflessness is very much evident here. ...read more.