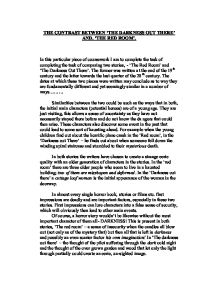 THE CONTRAST BETWEEN 'THE DARKNESS OUT THERE' AND, 'THE RED ROOM'. In this particular piece of coursework I am to complete the task of completing the task of comparing two stories, - 'The Red Room' and 'The Darkness Out There'. The former was written at the end of the 19th century and the latter towards the last quarter of the 20th century. The dates at which these two pieces were written may conclude as to way they are fundamentally different and yet seemingly similar in a number of ways......... Similarities between the two could be such as the ways that in both, the initial main characters (potential heroes) are of a young age. They are just visiting, this allows a sense of uncertainty as they have not necessarily stayed there before and do not know the dangers that could then arise. These characters also discover some event in the past that could lead to some sort of haunting ahead. For example when the young children find out about the horrific plane crash in the 'Red room', in the 'Darkness out There' - he finds out about when someone fell down the winding spiral staircase and stumbled to their mysterious death. ...read more.

For example when "You go down the passage for a bit," said he, " until you come to a door," * As the narrator looks out of his bedroom window he can see a silver moonlight. * There is a spiral staircase, this gives the sense of being out of control and unaware of what may lurk around the corner. * In his room there is a very large widow (large enough for someone to climb!). as well as flickering firelight. For instance when, " Large sombre room, with its large shadowy window bays, its recesses and alcoves." * The statues appeared as other mysterious objects due to the dim light. * The fact that the room is actually called the red room creates a sense of mystery and wonder to why it is called 'red'. * And of course it is at NIGHT. THE SETTING OF THE 'DARKNESS OUT THERE' * It begins peaceful and tranquil. It is set in a rural pastoral area in summer time. * The girl is walking through a field of flowers and seems without a care in the world. For instance when, "She walked through flowers, the girl, ox-eye daises and vetch and cow parsley." ...read more.

LANGUAGE IN THE RED ROOM In the 'red room' there is constant, frequent preference to the supernatural. An example of this could be when, "I half suspected the old people were trying to enhance the spiritual terrors of their house by their drowning insistence." Also, "for the moonlight coming in by the great window on the grand staircase picked out everything in vivid black shadow or silvery illumination." You can get the impression that the narrator is some sort of scientist as he is quite sceptical and speaks in a formal middle class way. The general language is very descriptive in its narration and fortunately contrasts very well indeed with that of the 'darkness out there'. THE LANGUAGE IN THE DARKNESS OUT THERE The general language is varied, in fact sometimes almost poetic and very descriptive, especially when describing the scene of summer, For instance when, "the girl bare brown legs brushing through the grass, the polleny grass that glinted in the sun" However the 'darkness out there' changes somewhat as it goes from a nice relaxing colloquial style of language to an abrupt style is used through the shock of swearing. All in all these two fantastic pieces of writing contrast very well as they both encounter many different styles of writing, from gothic to the supernatural to jolly to colloquial to strange ... (the list goes on!) ...read more.