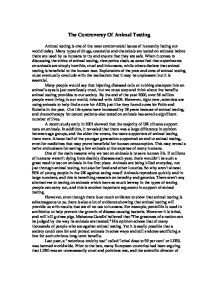 The Controversy Of Animal Testing

The Controversy Of Animal Testing Animal testing is one of the most controversial issues of humanity facing our world today. Many types of drugs, cosmetics and chemicals are tested on animals before there are used by us humans to try and ensure that they are safe. When it comes to discussing the ethics of animal testing, viewpoints clash, as some feel that experiments on animals are simply horrible, cruel and inhumane, while others declare that animal testing is beneficial to the human race. Exploration of the pros and cons of animal testing must eventually conclude with the realization that it may be unpleasant but it is essential. Many people would say that injecting diseased cells or rubbing shampoo into an animal's eyes is just mercilessly cruel, but we must stop and think about the benefits animal testing provides to our society. By the end of the year 2000, over 36 million people were living in our world, infected with AIDS. However, right now, scientists are using animals to help find a cure for AIDS, just like they found cures for Polio and Rubella in the past. ...read more.

For example, penicillin is used in antibiotics to help prevent the growth of disease causing bacteria. However it is lethal, and will kill guinea pigs. Mahatma Gandhi believed that "The greatness of a nation can be judged by the way its animals are treated." His opinion echoes that of many thousands of people who are against animal testing. Yet it is easily possible that a society could care for and protect animals in some ways and still endorse sacrificing a few for such obvious long-term benefits. Last year, a "notorious toxicity test" called 'lethal dose to 50 per cent' or LD50, was banned worldwide. Prior to the ban, many European countries had been arguing that LD50 was an unnecessarily cruel and pointless test, and the scientific director of Britain's fund for the Replacement of Animals in Medical Experiments claimed, "If you dosed an animal at this high level, its death was unlikely to be a direct effect of the chemical itself." The LD50 test also had questionable scientific significance according to scientists, and many animal welfare activists were delighted to learn of its abolishment. ...read more.

I'm sure that the rules on what scientists can inflict on the animals could be stricter, so as to help reduce the amount of suffering, but to actually be completely against animal testing seems irrational. Significantly great amounts of people have been saved, and it would be hypocritical for us to be against animal testing if we take medicine developed with the help of animals, or even wear make-up developed with the help of animals. One of the main facts that stands out the most to me is that the amount of animals used for experiments is actually 1% less than the number used for food, and yet meat-eating people remain against animal testing. Even brands such as Johnson & Johnson and Covergirl continue to test on animals as they make more and more money. Do not automatically decry animal testing before you know all the facts. Although we now experiment on more than 100 million animals each year, in the future we will have such advanced technology that we will not even need animals as guinea pigs. However, until that happens, the testing must continue so that a health and disease-free society for all can become a reality. ...read more.