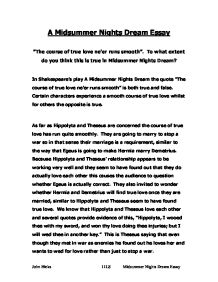 &quot;The course of true love ne'er runs smooth&quot; - To what extent do you think this is true in Midsummer Nights Dream?

To try and remove all the 'bumps in the road' and lead a life where they can love each other, they run away to the woods, even this doesn't work! The fact that this relationship works out in the end shows the audience that this relationship is one of true love and was meant to be! The events and people that got in the way were obviously just 'bumps in the road'. These events show that the course of true love may "ne'er run smooth" but it does turn out fine in the end and after the challenges they faced on the way, they are probably all better people for it! Another love in the play is that of Helena to Demetrius, this does not work all throughout the play, except when the love potion is involved, but in the end, after the audience thinks that the love potion has made a big mess of everything, we find out that it has actually made Demetrius realise that he doesn't really love Hermia but actually it is Helena that he loves. ...read more.

commits suicide because he thinks that his love, Thisby, is dead, she then also commits suicide. I think this was put in a Midsummer Night's Dream to show what a horrible ending could have come of all this if Theseus had stood firm at the end and forced Hermia to marry Demetrius, she would have died and so Lysander would commit suicide and more characters would follow! Overall I think that Shakespeare was trying to tell us that, "The course of true love ne'er runs smooth" as it is a very dominant theme in A Midsummer Nights Dream and it is very true in the play. He is also saying that love is very powerful and can bring great happiness but if it is abused it can cause great problems and unhappiness. In my opinion he invites the audience to conclude that although the course of true love may never run smoothly, it is an emotion so powerful that in the end it will triumph and the destination of a loving relationship will justify the journey however bumpy. John Hicks 11LS Midsummer Nights Dream Essay ...read more.