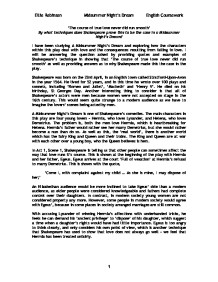 'The course of true love never did run smooth'By what techniques does Shakespeare prove this to be the case in a Midsummer Night's Dream?

'The course of true love never did run smooth' By what techniques does Shakespeare prove this to be the case in a Midsummer Night's Dream? I have been studying A Midsummer Night's Dream and exploring how the characters within this play deal with love and the consequences resulting from falling in love. I will be answering the question asked by providing quotes and examples of Shakespeare's technique in showing that 'The course of true love never did run smooth' as well as providing answers as to why Shakespeare made this the case in the play. Shakespeare was born on the 23rd April, in an English town called Stratford-Upon-Avon in the year 1564. He lived for 52 years, and in this time he wrote over 100 plays and sonnets, including 'Romeo and Juliet', 'Macbeth' and 'Henry V'. He died on his birthday, St Georges Day. Another interesting thing to consider is that all of Shakespeare's actors were men because women were not accepted on stage in the 16th century. This would seem quite strange to a modern audience as we have to imagine the lovers' scenes being acted by men. A Midsummer Night's Dream is one of Shakespeare's comedies. The main characters in this play are four young lovers - Hermia, who loves Lysander, and Helena, who loves Demetrius. The problem is, both the men love Hermia, which is heartbreaking for Helena. Hermia's father would rather see her marry Demetrius, but she would rather become a nun than do so. ...read more.

Shakespeare uses the basic plot outline of a fairy-tale so we always know what's coming, yet he does this with an element of surprise so we do not know exactly how Puck is going to make things go wrong at this point. Further on in the story, we see Puck putting the juice of the flower in Lysander's eyes instead of Demetrius'. This is another one of Shakespeare's almost un-noticeable tricks showing us the way love works. In this scene, Shakespeare is ultimately trying to tell us again that the involvement of other people often causes love to go wrong and the path of true love to become bumpy. "Who is here? ... This is he my master said, despis�d the Athenian maid;" It is interesting how easily, not just in this scene, Lysander and Demetrius' are mistaken for each other. This could be another technique which Shakespeare uses to tell us about love, possibly saying that love is random rather than following a set of rules, for if it was the latter Hermia could love Demetrius and make her father happy. The way that Shakespeare makes the two men, and indeed the two women, easily confusable is another contribution to the audience being told that love is never smooth; he is telling us of love's fickle nature. Also interesting to consider is the way that, in Scene 3 of Act 2, Puck so easily sorts out the lovers, and the way that it is so quickly and simply changed from both the men loving Hermia to both loving Helena. ...read more.

The most obvious technique he uses is getting other people getting involved who shouldn't be. He uses this to show us that love isn't always seen as a good thing from the eyes of other people, for example Hermia falling in love with someone her father doesn't want her to marry. He also shows us the pain of unrequited love using Helena and Demetrius, which shows us that we can't choose who we love. Another way he shows us this is by subtly telling us, with the use of the fairy story-line, that an un-attached world controls our love life and there isn't anything we can do about it, for love shall always take the most difficult path. The last and maybe most important technique he uses is the way that all of the lovers in this play seem to have a great many things in common. This technique is used throughout the play and seems to be Shakespeare's way of telling us that the course of true love is always the same, a mirror image of all the love stories since pre-history. The techniques that Shakespeare uses are often un-noticeable, but all of them contribute to the general idea that love is awkward, fickle and un-reliable, although Shakespeare does seem to be a believer that it will all work out in the end, as he shows us with the triple wedding ceremony as the finale of the play. ?? ?? ?? ?? Ellie Robinson Midsummer Night's Dream English Coursework 1 ...read more.