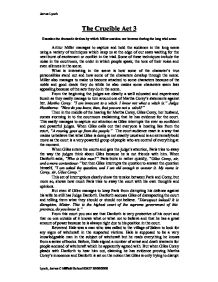 The Crucible Act 3 Examine the dramatic devices by which Miller sustains our interest during the long trial scene Arthur Miller manages to capture and hold the audience in the long scene using a variety of techniques which keep us at the edge of our seats waiting for the next burst of excitement or conflict in the trial. Some of these techniques include the noise in the courtroom, the order in which people speak, the tone of their voice and even silences in the scene. What is interesting in the scene is how some of the character's true personalities stand out and how some of the characters develop through the scene. Miller also manages to make us become attached to some characters because of the noble and good deeds they do while he also makes some characters seem less appealing because of the acts they do in the scene. From the beginning the judges are clearly a well educated and experienced bunch as they easily manage to turn around one of Martha Corey's statements against her. Martha Corey: "I am innocent to a witch. I know not what a witch is." Judge Hawthorne: "How do you know, then, that you are not a witch?" Then in the middle of the hearing for Martha Corey, Giles Corey, her husband, comes storming in to the courtroom exclaiming that he has evidence for the court. This easily manages to capture our attention as Giles interrupts the ever so confident and powerful judges. When Giles calls out that everyone is hearing lies from the court, "A roaring goes up from the people." The court audience react in a way that makes us believe that what Giles is doing is not exactly usual and is an extremely bold move as the court is a very powerful group of people who are control of everything at the moment. When Giles enters the courts and gets the judge's attention, Paris tries to sway the way the judges think about Giles because he is not friends with him. ...read more.

When Giles continues to refuse the name of the man who heard Putnam commit the crime, Giles is arrested for with-holding evidence and contempt of the court which is ridiculous because he is just trying to protect an innocent man who is trying to stay out of trouble and does not have the confidence to face the court. Hale knows this and tries to tell the judge but Danforth sticks by the books and demands the name of the man, which is not delivered. Hale's switched allegiance away from the court is confirmed and Danforth also realizes it, taking offence from it. "In God's name sir, stop her; send him home and let him come back again with a lawyer-" but Danforth butts in: "Mr Hale, you surely do not doubt my justice...Mr Hale, believe me; for a man of such terrible learning you are most bewildered." Again Danforth shows how protective he is of his court and how he believes that he is never wrong and anyone who disagrees with him is wrong, or in Mr Hale's case, bewildered. In questioning Mary, Danforth uses very abrasive methods which clearly intimidate her. He tells her that whether she was lying or if she is lying now, she will go to jail for perjury. Danforth tries to test Mary by making her pretend that there is a spirit in the room and faint, because that is what her and the other girls have been doing the entire time; pretending to faint without seeing any spirits. But Mary can not do it, claiming that she could do it before because she heard the other girls screaming so she 'thought' she saw them, but really didn't. Then out of thin air, the girls start to go very cold, claiming that there is a cold wind running through the room, a shadow wind sent by Mary. This action shows how ruthless they are in their accusations because they so easily turned on Mary, even though they were very good friends with her until very recently. ...read more.

Miller easy conveys the trouble problem of this in the situation, partly helped by his own experience. Miller was once rightly accused of attending communist meetings, which in the U.S. at the time, was against the law. Although attend was all he did he had to go into court with his back against the wall. In court he was intimidated by the judges and was offered a possibility of reducing his jail time or erasing it all together. He was told that if he gave in the names of other people who also attended communist meetings he would get off lighter. But, Miller, being the honest and caring man he is, decided to not give the names of others who attended the meetings, but instead decided to take full force of his punishment. This is extremely similar to the situation that Giles Corey managed to get himself into in. He knew that he couldn't give the name of the person who overheard Putnam telling his daughter to accuse Martha Corey because he knew that the man would most likely end up in jail because Putnam was in a higher social class, therefore better protected from the law. Because h did not give in the name he was arrested and later executed after being crushed to death by slabs of stone which were being used as a torture method to get the name from Giles. But he was loyal to the man and got his own life taken instead. Although Miller might not have had to pay with his death, he still received a jail sentence rather then getting it shortened or maybe even erased. He also knows how it feels to be used because the judges knew he couldn't get out of the situation he was in so decided to pressure him for the names. The Crucible was a great example of the former corruption of major justice systems which now has the saying for any trial, 'Innocent Until Proven Guilty', instead of the other way round. ?? ?? ?? ?? James Lynch . Lynch, James C Millfield School 63437 29/09/2006 ...read more.